"Vex encryption. Unbreakable? Ha, so they say."
This article does not have enough inline references. You can help Destinypedia by adding citations.
For more information, see the citation policy.
This article is about the Fallen Archon. For the Vex unit, see Fanatic.

Fikrul, the Fanatic is the leader of the Scorned Barons, and the Archon of the Scorn. As the only member of the group to escape capture, he fled into hiding while his comrades were imprisoned within the Prison of Elders. Fikrul believes that the Scorn are the natural evolution of the Eliksni, and that through his leadership, the race can find immortality. He is a Chieftain class Scorn leader, and the boss of the Nothing Left to Say Story Mission as well as the Hollowed Lair Strike.

Due to the nature of his resurrection abilities, Fikrul can seemingly never truly be killed, and has retorted that he will continue to return to seek vengeance upon the Guardian. Fikrul has the ability to corrupt the ether inside Eliksni, turning them into Scorn.

Fikrul was once a well-regarded Archon Priest of Kaliks Prime within the House of Wolves, but was soon cast out after speaking against the Great Machine and lamenting his species' dependence on Servitors for survival and would be replaced by Aksor, Archon Priest. His words would later influence others like the techno-deviant Devil Splicers of the Plaguelands, while Fikrul himself explored his own darker interpretations of faith.

Following the Taken War, Fikrul would go on to lead a group of lowly Dregs cast out from the House of Exile, who collectively titled themselves the Scorned Barons. Together they unleashed havoc amongst the Reefborn Awoken and various Fallen Houses in the Reef, ultimately leading to the demise of the House of Wolves through the destruction of all their Servitors. They would later become captured in a final standoff between Cayde-6, Petra Venj, and their posse of Guardians; leaving only Fikrul as their Archon to evade capture. 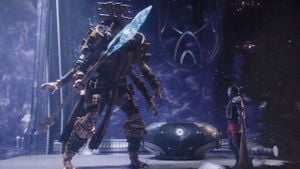 Fikrul alongside Uldren, his "kindred spirit"

At some point following the Taken War, Prince Uldren formed an alliance with the House of Kings, and in his search for Mara Sov he discovered a mortally wounded Fikrul. Uldren wished that he could save the dying Fallen; his wish was heard by Riven, the Taken Ahamkara residing in the Dreaming City, who Uldren had long ago brought to the Reef as a hatchling. Riven granted Uldren's wish by infusing some of Uldren's Darkness into Fikrul's Ether, creating Dark Ether and raising him as the first Scorn. Fikrul thereafter treated Uldren with devotion and reverence, calling him "Father" and believing that Uldren had granted him his new life and powers.

In gratitude, Fikrul would assist Uldren in taking out the House of Kings, usurping Craask, Kell of Kings whom conflicted with his ambitions. In a grand betrayal, Uldren summoned Fikrul to dock Craask of all four of his arms and reduce the former Kell to the rank of a Dreg. Rumors later circulated among the Fallen that Uldren and Fikrul had slain Craask outright, along with the entire House which Fikrul then raised as the first undead Scorn with his Dark Ether.

A year after the Red War, both Uldren and Fikrul were caught by Cayde-6 and taken to the Prison of Elders. When Variks, the Loyal; an old friend, imprisoned Fikrul, he asked about the whereabouts of Kaliks Prime. Variks asked him if he betrayed the last Prime to the Taken and if that is the source of his corrupted ether. Fikrul replied that Kaliks has actually abandoned the Eliksni altogether. Following Riven's machination, Uldren took advantage of Variks's waivering loyalty and tricked him into releasing the prison's inmates, causing the Scorn to breakout out en-masse and killing Cayde in the process. 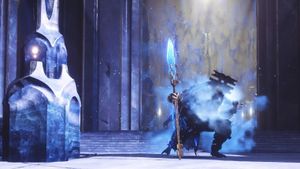 Fikrul the Fanatic fighting in the Awoken Watchtower

With the Scorned Barons now freed, Fikrul and the other Barons were offered the bounty of the Tangled Shore by Uldren as reward for their loyalty, bringing chaos to the local Fallen under The Spider's command. As a result, their hideout was tipped off to a vengeance-seeking Guardian causing the Barons to flee whilst Fikrul raises a powerful undead Scorn to face the Guardian, all while mocking them over his necromantic mastery of Dark Ether before fleeing.

When the Guardian finished The Machinist and the other six Scorned Barons, Fikrul and the remaining Scorn accompanied Uldren on his travels to unseal the Dreaming City, warning him of the immediate danger that posed beyond the point of entry. Fikrul offered to go into the Watchtower in Uldren's stead, but was told to defend it from the Guardian. Accepting his orders, Fikrul challenges the Guardian themselves to avenge his Scorned brethren only to die by their hands instead, seemingly avenging Cayde-6 of the Barons who slew him.

Unlike the other Scorn that died to the Guardian however, Fikrul is able to resurrect himself thanks to the Dark Ether within. Recognizing his resurrecting abilities were similar to that of a Guardian, the Vanguard assigned multiple Strike teams to continuously put him down as to suppress the Fanatic and putting a stop to his plans to resurrect the other Barons, while the Praxic Order reached out to Cryptarchs and Gensym Scribes for ways to make his destruction permanent. 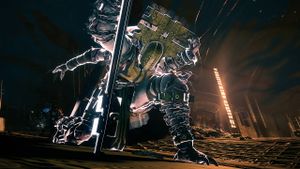 "In the depths of the Prison of Elders, the Fanatic found his calling. With his fellow Barons by his side, the Fanatic murdered Cayde-6 on the orders of former Prince of the Reef, Uldren Sov. The Fanatic was able to resurrect the dead. It's only fitting the Pyramid would do the same for him."
— Eris Morn, speaking of Fikrul.

At a later date, the Guardians conduct Nightmare Hunts to push back the Pyramid's influence which often results in the creations of more nightmares. One said hunt has Guardians face the Nightmare of the Fanatic, representing the Essence of Insanity. After a struggle that leads the Guardians to the ruined Shrine of Oryx, the Guardians succeed in putting the Nightmare down.

Sometime after the Exorcism of Savathûn's Worm from the Witch Queen's body, but before the appearence of The Lure over the returned Mars, the Fanatic was said to have been driven from the Tangled Shore, though his current whereabouts are unknown. 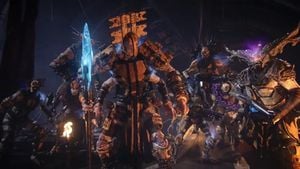 Fikrul alongside his Scorned Baron

Like all Scorn, Fikrul displays a degree of insanity, though he is more coherent than many of his Scorn underlings or some of the other Barons. Fikrul appears to see the Scorn as a family, as he refers to Uldren as "Father", calls the other Scorn Barons his siblings, and calls his Scorn underlings his children. This is further supported by his genuine outrage at the other Barons' death at the hand of The Guardian, as well as his willingness to resurrect his inferiors, as well as any deceased Fallen as Scorn (although the latter could easily be more driven by his goals and his need of an army to complete them). He also doesn't believe in killing without purpose (he only kills to "immortalize" an Eliksni or further his sense of righteousness), and as such berates The Guardian for murdering the Scorn Barons just to pursue revenge. It also seems that he genuinely cares for the Eliksni species, as he howls at The Guardian for murdering countless Fallen, who have done nothing but try to survive. Overall, it seems Fikrul is more of an anti-villain; he has sympathetic intentions and is far from truly evil or immoral, but he is still willing to commit dark acts to carry out what he perceives as good or just.

Fikrul engages the player with his signature lightning staff, which fires charged Arc projectiles that can break a Guardian's shield in just a few hits, akin to a Wire Rifle. He will also use his staff to summon large electric circles known as Wrath of the Scorned, which can summon lesser Scorn units; these circles take up a large space and can deal heavy shocking damage over time to anyone that stands within it. Occasionally, whenever his health reaches a certain threshold, Fikrul will surround himself with Void energy to render him immune to all damage shortly before teleporting the player into the air, surrounding himself with a random elemental shield, and tethering them to his staff, dragging them towards him so he can smash the ground to break their shields and knock them back. To keep up his attack, he will teleport towards the player and overwhelm them with high-impact electric staff projectiles. Fikrul's powerful attacks and tether ability make him quite possibly the most dangerous Scorn Baron to engage, for the only safe way to engage him is keeping as much distance between him and oneself as possible.