"An enormous amount of hope and anger has been spent on a particular debate - could we find a Vex gate that opens onto a place and time before the Collapse, and somehow forestall it?"
— Grimoire description[1]

Zydron, Gate Lord is a unique Vex Minotaur unit that protects the Endless Steps. It appears in the Eye of a Gate Lord story mission on Venus. Guardians must bring its head to Queen Mara Sov to wake its Eye in order to enter the Black Garden.[2]

According to the Grimoire, Zydron typically exists in a "liminal state," stretched between multiple gates or terminals, and only inhabits a body when the need arises.[3]

Like other Gate Lords, Zydron is in charge of protecting the realms that the Vex access, and possesses a special code that links them to points in time.

When the Guardians needed to enter the Black Garden, Queen Mara Sov and Prince Uldren Sov revealed to them about the existence of the Gate Lords. After learning more about the Vex the Guardians travelled to the Endlees Steps to confront Zydron. After Zydron was defeated the Warp Gate that it used was destroyed.

After the awakening of the Pyramid on Luna, Zydron was recreated as a Nightmare to haunt Guardians and protect the portal to the Black Garden. Eris Morn tasked the Guardians to defeat the Nightmare of Zydron, Gate Lord and retrieve its Essence of Servitude. During the mission, Eris would compliment about how she admired the Vex Gate Lord's determination to defend their realm. [4]

Zydron would be recreated by the Starhorse to become one of its champions on Dares of Eternity, representing the Vex. With its recreation, Zydron received various upgrades, including a new chassis.

Eye of a Gate Lord[edit]

Zydron is larger than other Minotaurs, but it cannot teleport, has a weak spot below the chest and does not have a Void shield. Its body is black rather than the normal copper coloration. When Guardians first encounter Zydron, its body parts are separated. When engaging the Guardians, the separated body parts attach to each other and compose the full body of Zydron. 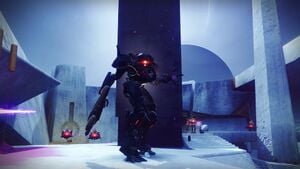 Zydron in Dares of Eternity

With Zydron's return as a Dares Champion, it has gained the ability to teleport, as well the ability to create detainment walls. When the fight starts Zydron is protected by an Immunity Shield and will activate its Detainment Wall Protocol and summon Vex. After the Guardians evade waves of detainment walls Zydron will summon the Xur's Keybearers. This Minotaurs must be killed to deactivate Zydron's Immunity Shield and start the damage phase.