"(Cheery) I can help you! (Depressed) But I'm going to be super unpleasant about it."
— Failsafe

Failsafe (also known by the designation AI-COM/XBLK) is the Golden Age Computer Core of the Exodus Black colony ship encountered by Guardian forces on the centaur Nessus. Due to damage to her mainframe, she vacillates between two very different personalities, one cheerful and helpful (despite Ghost's opinions), the other depressed and sarcastic. She is known to collaborate with Last City scholars by providing computational power or access to her database.[1][2]

Crash of the Exodus Black[edit]

"I'm sorry, but I'm unable to keep pace with what is happening to my computational capabilities! The Exodus Black is now in an unrecoverable descent. Please make whatever preparations are appropriate!"
— Failsafe[3]

Failsafe was launched onboard the Exodus Black from the Cosmodrome, intended to accompany the ship on its journey through interstellar space to the Kepler-186 system. On the way, the crew of the ship were surprised by the unexpected appearance of Nessus on their flight vector. Both Failsafe and the Exodus Black crew attempted to adjust the ship's course away from Nessus, but the centaur introduced 26 new mathematical constraints required to recalculate the course. Additionally, Failsafe was inhibited by a sudden alien intrusion into her systems, making her unable to compute the appropriate adjustments.[3] After losing an engine, the ship crash landed on Nessus due to the anomalous addition of six dimensions to the ship's momentum.[4]

With supplies exhausted after nine days crashed on Nessus, an Exodus Black crew member disabled Failsafe's shackle programming, enabling her to think more freely and possibly beginning the future development of Failsafe's second personality.[5] During this time, crew members continued to die off, with many opting to leave the others, and some becoming subject to experiments by the local Vex.[6] Failsafe was left alone some time after Captain Masoud Jacobson left the Exodus Black in an attempt to use the ship's satellite array to call for help. She would remain this way for at least 500 years, all the while suffering damage and undergoing self-repair, developing new emotions and her second personality.[7] 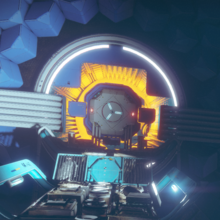 "Cayde unit, I have great news! A ship similar to yours has entered the gravitational radius of this planetoid!"
"What?! All right! Uh-oh. Listen, the next teleport's about to happen. Don't tell them that I got in over my head, OK? Tell them it was some kind of Vex trap or something. Got it? Failsafe?"
— Failsafe and Cayde-6[8]

Failsafe remained alone until centuries later during the Red War, with the arrival of the Hunter Vanguard, Cayde-6. Cayde encountered Failsafe while attempting to acquire a Vex teleporter with the goal of bringing himself close enough to Dominus Ghaul to assassinate him.[9] This plan backfired, trapping Cayde in a teleportation loop. Convinced he would be stuck in the teleportation loop forever, Cayde had Failsafe help him record a message to his son Ace, who Cayde noted he wasn't sure even existed. After a number of attempted recordings interrupted by teleportations, Failsafe alerted Cayde that a ship similar to his own had just entered into Nessus orbit. As Cayde was about to teleport again, he asked her to tell the ship that he did not enter the loop voluntarily, but fell into a Vex trap instead.[8]

Failsafe greeted the ship not long after it arrived, which turned out to be carrying the Guardian and their Ghost. With her help, the Guardian manages to meet up with Cayde and disable the teleporter, leaving Cayde at the Exodus Black's reactor core.[10][11] The Fallen appeared not long after, having presumably followed either Cayde or the Guardian to Nessus, and engaged in a skirmish with the Vex between the wreckage of the Exodus Black. A detachment of the Fallen simultaneously converged on Failsafe's core, prompting her to raise a defensive shield while Cayde sought refuge within. The Guardian broke through and secured the Exodus Black, to the joy of Failsafe, who declared them the new captain of the ship.[11] 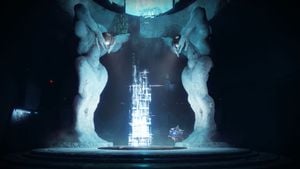 The strange Harpy waiting by a conflux.

"Sometimes, I think I hear my former Captain's voice on the comms. That is highly improbable because he should be dead!"
— Failsafe

Sometime after the end of the Red War, Failsafe reported to the Guardian that she occasionally hears the voice of Captain Masoud Jacobson on the comm system. At her request, the Guardian began investigating, and to the surprise of Ghost, managed to uncover the remains of Exodus Black crew members, still in their suits. These suits contained recordings of events long past, and eventually they found a recording of Captain Jacobson declaring his intent to leave the Exodus Black to use the satellite array. With this information, the Guardian retraced his path to a computer console in the Glade of Echoes, which was still attempting to transmit a mayday signal from Captain Jacobson. The message playback was interrupted by a Vex transmission that Failsafe recognized as a greeting and/or a war cry. Vex units began to appear, accompanied by Empathic Sentinels carrying memory data. The Guardian collected this data for Ghost to analyze, and discovered that the Vex believed Captain Jacobson was coming to meet them. This brought their attention to a strange Harpy, which they pursued at the insistence of Failsafe.[5]

Meeting the Harpy in the Sunken Cavern, it greeted them as if it was the Captain himself and beckoned them to follow it further into the cavern. Hostile Vex units began to attack, in an apparent series of trials, as the Guardian performed mind links with the Harpy at Confluxes. This led to the Harpy taking the Guardian to the skeletal remains of Captain Jacobson and Ghost extracting a final log from his suit. Knowing that he was most certainly dead, Failsafe received closure and thanked the Guardian for their assistance.[12]

At some point Failsafe befriended the Ghost later known as Glint, who visited regularly.[13]

A year following the Red War, Failsafe received word of the death of Cayde-6 at the hands of Uldren Sov during a mission at the Prison of Elders in the Reef. The next time the Guardian visited Nessus, Failsafe offered them her emotional support. She also expressed that she believed grief became easier to manage the more one experiences loss, as in the loss of her own crew, but that Cayde's death disproved that theory.[14] Following Uldren's death, she stated that the news did not ease her grief over the loss of Cayde. Some time later Glint stopped visiting as well, having resurrected the late Uldren as his Guardian.[13]

A little over another year later after the discovery of a Pyramid on the Moon, the Guardian visited Failsafe on the behalf of the recently reemerged Saint-14, who sought a way to honor the colonists lost aboard the Exodus Black. Failsafe suggested that regular patrol duties on the planetoid would be sufficient to honor their memory.[15]

Two years after his last visit, during the Festival of the Lost, Glint returned to Failsafe to enlist her aid in researching the Headless Ones. After begrudgingly commenting that she'd discovered the emotion of betrayal specifically because of Glint, she let him on board to discuss the matter.[13] She explained that she'd detected them in the nearby ruins for centuries but not very often, and suggested they play checkers before Glint continued his investigation.[16] Glint won, prompting Failsafe to "accidentally" explode their holographic board and offer to reveal the origins of the Headless Ones the next time Glint returned, proclaiming it to be an incentive.[17]

At first glance, Failsafe may appear to have a simple personality, either being extremely happy or extremely depressed. While she may have had a comparable cheery personality early in her life, listening to the content of Failsafe's speech reveals she is perfectly capable of experiencing a wider range of emotions, including anger and grief.

If the personality speaking is not noted, assume cheery.

Failsafe serves as the vendor and one of the main quest givers for Nessus. She is situated at the Exodus Black. Turning in Nessus tokens, Microphasic Datalattice and Quantized Datalattice increases player reputation with Failsafe and rewards Legendary faction gear, shaders and other rewards.