Season of Opulence (previously known as Penumbra) is the seventh season of Destiny 2 and the final content of the Forsaken Annual Pass, starting from June 4th 2019 and ending September 30th, 2019. During the season, Guardians are invited by the former Emperor Calus to the Menagerie aboard the Leviathan as they meet his challenges and are tempted to join his Loyalist regime as the new Shadows of Earth.

"This Season, Emperor Calus beckons Guardians to prove their worth by pitting them against foes in his Menagerie. He'll send Guardians on treasure hunts throughout the system to unlock the power of the Chalice of Opulence—upgrades that allow you to choose the type of gear you earn."

"Assembling your Chalice of Opulence is just the first step. Calus has crafted a maze of challenges in his lost vaults. Test your strength in the all-new six-player matchmade activity, the Menagerie, and meet his challenges head on to unlock your rewards."

"Treasure Awaits
Upgrade the Chalice of Opulence to better refine which gear you earn."

"Replayability
Carve your way through ever-changing paths and enemies."

"Seek out the most valuable treasures in the underbelly of the Leviathan. Jump into the new Crown of Sorrow raid and join the race for World's First on day one!"

"Annual Pass content in Season of Opulence provides a new path to earn some of the best gear in the game. Use the Chalice of Opulence to choose which type of gear you earn from the Menagerie. Unravel the mystery and unlock its power to build a loadout that matches your playstyle."

"Power Surge
Forsaken owners can heed Calus's call to quickly catch up to the Power of their fellow Guardians."

"Iron Banner Returns
Destiny 2 owners should return to Lord Saladin and discover how they can forge a path to new rewards."

"Exotic Weapons & Armor
Annual Pass owners can add more of the best weapons to their Collections."

"Every player of Destiny 2 will find their rank reset in the Crucible, Gambit, and Vanguard missions. At higher ranks, Guardians will find rewards that double as both weapons and trophies. Earn the right to carry evidence of your prowess into battle."

"Revoker
Missed shots are returned to the magazine after a short duration."

"The Solstice of Heroes is a tradition in which Guardians reflect on past hardships and celebrate the resilience of humanity's foremost defenders. Celebrate with other Guardians in this limited-time event!"

"Embrace the Light
Create Elemental Orbs by matching your elemental damage to the daily element. Collect 30 orbs to gain the Empowerment buff!"

"Be Triumphant
Harness the power of the elements to optimize your pursuit of glory and loot while Moments of Triumph is still active."[1]

This season introduces a new Raid, Crown of Sorrow, and a new six-player matchmaking activity called Menagerie, which Guardians must complete various objectives amidst randomized, varying encounters. Using the Chalice of Opulence allows players to choose the type of loot earned at the end of every Menagerie run. Players will also be able to unlock a trophy room aboard the Leviathan known as the Tribute Hall, which also doubles as a shooting gallery. Also available for the season are three new Exotic Quests for Lumina, Truth, and Bad Juju; the latter two are reprising Exotics from Destiny and the other completely new. 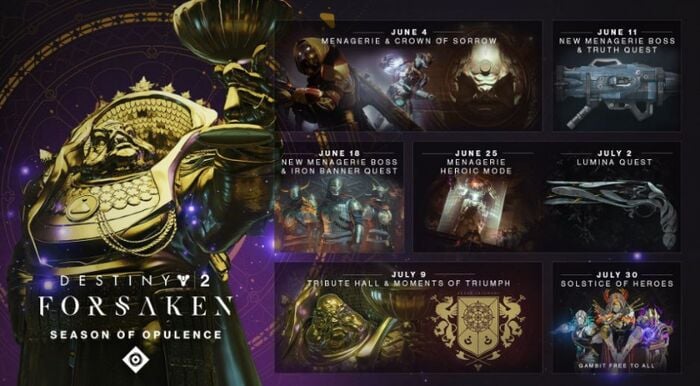 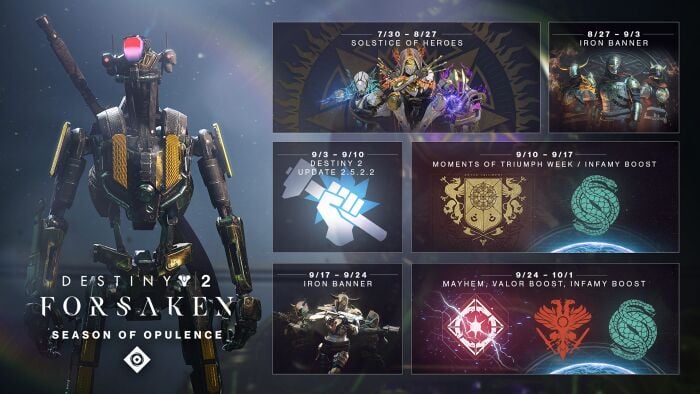