"Tell me, Guardian: Do you trust me? Do you believe I am an ally of the Light or a servant of the Darkness? What if I told you I was neither?"
— Toland, the Shattered

Toland, the Shattered was a Warlock Voidwalker who studied the Darkness and Hive lore, which led to him being deemed mad and exiled from Last City together with his Ghost Guren.[3] He was an expert on "forbidden" Hive arcana; for that reason, he was recruited by the Praxic Warlock Eriana-3 to be part of the six Guardian Fireteam who delved into the Hellmouth in search of Crota. Considering only Eris came back alive, he was assumed to be dead, though unlike the other members of the fireteam, his fate was never witnessed by anyone else. After Eris' return to the City and the start of her cooperation with the Guardian, messages purportedly written by Toland were discovered, indicating he yet survived in the Ascendant Realm. He attempted to communicate to the Guardian by unknown means, as he was taking "a debased joy in speaking again to small human-form heads." He is believed to be the creator of Bad Juju[3], an exotic pulse rifle covered in the bones of an unknown creature. In addition, Toland is said to have left behind Shadow Price, a legendary auto rifle issued to the Vanguard. Along with Eris and the Guardian, he has also forged Deathbringer, an exotic rocket launcher which repurposes a captured Deathsong.

"They want to know what you know."
"Yes. And I will tell them, but they will never understand. I'll greet them with a smile and welcome them in. I will learn how we can benefit from their ignorance."
— Guren and Toland, when Eriana and Eris approached him about the knowledge how to destroy Crota

Many of Toland's discoveries survived him via fragments of his journal and the memories of dead Ghosts. A whole copy of the journal was kept by Eris Morn. His studies led him to conclude that the Darkness was the evolutionary endpoint of the universe and that its campaign of destruction was to ensure that nothing could ever rise to challenge it.[4] He had a fascination with Hive rituals, particularly the Deathsong of Ir Yût.[5]

Years after Toland's exile and in the aftermath of The Great Disaster, the old Warlock was visited by Eriana-3 and Eris Morn, who were seeking a way to destroy the Hive Prince Crota. He revealed to them that Crota could be killed if they were to enter the Ascendant Realm and slay him within his throne room after defeating his champions. Toland warned them of the many dangers they would face and spoke of the mysterious song sung by the Deathsingers that he wished to understand. Toland decided to join them in their quest to end Crota in order to learn more about the Hive, and they recruited three other Guardians to their mission: the Titan Vell Tarlowe and the Hunters Sai Mota and Omar Agah.[6] As they prepared for their mission, Toland imparted what he knew of Hive lore to Eris, including his knowledge about the Ogres known as the Might of Crota, which would be unleashed when Crota's will was challenged. Eris questioned how he had come by this knowledge, and Toland claimed to have learned it from the Darkness itself.[7]

His fascination lead him to attempt to "identify [him]self a friend" in Ir Yût, the Deathsinger. Though the Deathsinger's song destroyed his body, it "redefined him" and enabled his consciousness to survive in the Ascendant realm as an Ascendant soul itself.[8]

Journey in the Ascendant Realm[edit]

"You fools! You disastrous, bumbling squanderers! It's not right! Who now shall be First Navigator, Lord of Shapes, harrowed god, Taken King? Not you! You might have been Kings and Queens of the Deep! But you have toppled Oryx and you have not replaced him! There must be a strongest one. It is the architecture of these spaces. Why are you leaving?"
— Toland.

He watched the Guardian's progress in their war against Oryx, aiding them indirectly through his messages yet regarding their victories as simply an extension of the Sword Logic. He was infuriated, however, when the Guardian defeated Oryx but refused to take up the mantle as the new Taken King.[9] It is possible that the reason Toland was so upset about the Guardians refusing to take Oryx's place was that he became a firm believer in the Sword Logic and the nature of the strongest ruling. With the Guardians freeing the Light, not Taking it and leaving Oryx's throne vacant, it was obvious Toland felt the Guardians squandered the chance to take Oryx's place, and more so that the Sword Logic failed and was now broken. This in turn left Toland's deeply held beliefs and his years of studying the Hive all for nothing.

Toland's voice can be heard in Destiny 2 during the Voidwalker subclass mission. He will recount some of his discoveries about the Hive and the Darkness, and how he entered the Ascendant Realm.

In The Depths of The Dreaming City[edit]

"Guiding the uninitiated toward a final battle of spectacular futility used to be my specialty, you know. Forgive me if I'm a little rusty."
— Toland

Toland still journeys through the Ascendant plane between throne worlds; it is also revealed that he created a small worldlet for himself. After her death to Oryx, Toland held an encounter with Mara Sov on her journey to Eleusinia. When he questioned her, Mara temporarily drove Toland out of his realm and used it as a resting point for her trek through the Ascendant plane.[10]

Restoration of the Bad Juju[edit]

"Inflict your desires upon reality, Guardian. One good death deserves another."
— Toland guiding the Guardians

After Gahlran, the Sorrow-Bearer went insane, the ensuing Hive corruption tore part of the Leviathan between normal space and the Ascendant Realm. Emperor Calus located the Bad Juju sometime after this hoping to lure out Toland, unaware that his physical form had been destroyed. A month later, The Guardian discovered the place aboard the Leviathan where Calus had left the Bad Juju, whose Ahamkara essence had gone out of control and affected the distorted parts of the ship.

Within the Ascendant Leviathan, Toland travelled to the epicentre of the rampaging essence, where a crew of Loyalists were engaged in a deadlock against Taken originating from the Hellmouth, to taunt the Cabal for tampering with his keepsake. All of the Taken and Loyalists in the realm were eventually slain, and their deaths used to seal the Ahamkara essence back into Bad Juju, restoring it and leaving the Guardian to claim it for themselves. After this, Toland ominously warned the Guardian of threats superior to the likes of the Hive's strongest individuals. 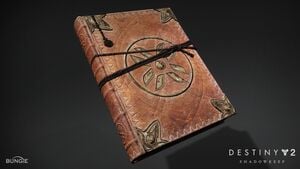 "I will teach you what I know. Executions are so much more fun when the martyr thinks they have a chance against the lion."
— Toland, the Shattered

When Eris Morn became trapped in the Ascendant Realm, Toland reunited with his old fireteam member, despite her initial suspicions after surviving an encounter with the Witch-Queen. As they both reflected on their experience with their tragic descent into the Hellmouth, Toland brought up the idea that something greater was at play and how Savathûn was previously goading Eris into looking into. He last warned her of the dangers she was treading into before she was warped away to the Dreaming City.

After Eris had accidentally triggered the appearance of the Nightmares, Toland turned his attention to the Moon. While monitoring the Hive's activity, he began sharing information with Guardians willing to listen. When Eris sent the Guardian on a quest to harness the Hive's Deathsong, Toland decided to aid them out of curiosity. He guided the Guardian to different components needed to access the song and watched as they slew a new choir of Deathsingers gathering underneath the Moon and used their remains to create the Deathbringer.

Saint-14 and Osiris discussed the whereabouts of Toland after his assistance on Luna, apparently researching the Hive in the Dreaming City before the Black Fleet arrived and before Xivu Arath unleashed the Cryptoliths and Wrathborn in the Sol System. [12]

Toland was described as one of the chief experts on the forbidden arcana of the Hive but he grew obsessed with their secrets, which ultimately led to his exile, as the Speaker believed he posed a danger to the Last City. Toland himself admitted he might be mad in one of his reports. Through his intense research of the Hive and the Darkness, somewhere down the line he started to believe in the Sword Logic and see it as the force ruling the cosmos, and it infuriated him that he could not make others understand it.[4]

His main motivation and driving force always seemed to be curiosity. He possesses a deep hunger for knowledge and secrets, even willing to risk his very being to learn them; Eris remarked that made him predictable, regarding his earlier appearance in Mara Sov's throne world. He takes joy in preaching his beliefs and findings, and feeling his words are falling for deaf ears irritates him greatly. He seems to be enjoying his role of a foul guide, laying out a trail of breadcrumbs and watching others follow it. Even his bitterness towards the Guardian would in time be defeated by this - in A Hum of Starlight he angrily remarks he will not be our Virgil guiding us through the dark, and when we meet him again on the Moon in Shadowkeep, he proceeds to do just that.

Toland often speaks in lofty, sarcastic tone, deriding his listeners for being boring and foolish - all the while clearly relishing every opportunity he has to preach his agenda. His writing is full of poetic language and convoluted metaphors, and Ghost even notes that Toland must not have been "fun at parties" after hearing an entry from his journal.

His relationship to his fireteam was a complicated one, as they valued the knowledge he possessed but were distrustful of his secretiveness, Eris even accusing him of "holding [his] secrets like weapons" in order to doom them.[14] Eriana blamed him for the fireteam's tragic end[15], and her Ghost Jax urged anyone listening not to trust Toland in its last transmission.[16]. Eris herself seems to have conflicting feelings about him, feeling as if she should not miss him yet listing him among her friends and arguing that "a fireteam's bond are not so easily undone".[17].

Toland himself admits to having always respected, and still respecting, his fireteam members[15]. When Eris met him in the Ascendant Plane, he expressed genuine concern about her wellbeing and warned her of the threat the Witch-Queen posed. He does not think too highly of the Vanguard, believing them to be small-minded, and calls the Speaker a "masked hypocrite".[18] At one point he vocalizes his respect for Wei Ning, noting that he admired her directness.[19]

Shard of the Traveler quotes[edit]

Choir of the Damned, Symphony of Death

Faculties of the Skull, Symphony of Death