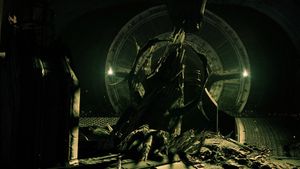 "There's a... new strange presence here. It grows as an organic technology, like a small tower. There were Cabal gathered around it, enraptured by something I could not perceive. Perhaps their own desperation — or madness."
— Osiris's report upon discovering a Cryptolith

Cryptoliths are Hive structures created and utilized by Xivu Arath, the Hive God of War, in order to corrupt the enemies of the Last City and turn them into mindless and enraged champions for her army known as the Wrathborn. They were first encountered on the Moon, Tangled Shore, and deep within the Dreaming City, but are now spreading across the solar system wherever Xivu Arath's influence is found.

Like most Hive architecture, Cryptoliths are partially biological, growing like plants wherever they are seeded, with gristly living tissue as lubrication for its metal internals.[1] When dormant, they lie still and are mostly hidden below ground; when activated, they rise up and begin glowing, and various pieces of their outer shell begins to move. They are considered hard to remove, such as with a Cryptolith at the Reef that attempting to do so would destroy the Tangled Shore. Cryptoliths each also possess the ability to open up and reveal a portal to the Ascendant Realm, presumably even Xivu Arath's throne world.[2]

According to Osiris and Ana Bray, Cryptoliths are able to incite conflict in both mind and mechanism, able to cause technology and computer protocols to turn on each other to try and cannibalise the other, and cause even the sturdiest of blades to bend to Xivu Arath's will.[3] According to Clovis Bray I, files corrupted by Xivu Arath contain traces of a virus that contain code patterns reminiscent of biological encoding structures.[4]

At an unknown point in time, the Cryptoliths were utilized by Xivu Arath in her invasion of the Cabal capital world of Torobatl after Umun'arath summoned her through a Hive ritual.[5] As the Cabal attempted to repel the incoming Hive army, the city was overtaken as the Cryptoliths emerged began infecting the area.[6]

In Season of the Hunt, Cryptoliths began appearing across the Tangled Shore, the Dreaming City and Luna, heralding the arrival of Xivu Arath's forces. The appearance of these structures was much to the annoyance of Spider, who began to find his criminal elements being turned toward worship of the Hive War God upon their encounters with the Cryptoliths. Conferring with Osiris, Spider provides information on the Cryptoliths, which leads Osiris to Earth's moon in his investigations. There, he encountered the High Celebrant, the herald of Xivu Arath. Osiris narrowly survived this encounter, losing his Light, and was possessed by Savathûn. Savathûn, guising as Osiris, was then saved from a Wrathborn by Crow.

Crow, an amnesiac Uldren Sov, had been taken in by Spider, and was used as an enforcer to deal with the Cryptoliths through hunts of Wrathborn associated with them. Working with the Guardian, Crow developed lures to bring out Wrathborn at Cryptoliths, harming them enough to make them run, and then following their trail back to their lair where they could be executed. In doing so, experience was gathered and a plan formulated to lure out the High Celebrant in the same fashion, eventually leading to its own execution in the Dreaming City. This ended the current push of Xivu Arath, and the pernicious influence and spread of the Cryptoliths.

With the advent of Season of the Seraph, Cryptoliths have begun spreading across the system once more, appearing in new and familiar places. As discovered by Osiris, Clovis Bray and Ana Bray, Cryptoliths can not only infect organic minds and turn them towards working for Xivu Arath, but also inorganic minds such as computers. The presence of Cryptoliths is intended to infect the Rasputin network, so it can be used to annihilate humanity once control is taken by Xivu Arath. The Vanguard must work to prevent the free movement and operation of the Hive to avert losing the Warmind and its network of weaponry across the system.