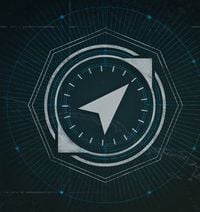 "These are our worlds...Take them back. Inch by inch. Bullet by bullet."
— Grimoire blurb.

Patrols are the primary open-worlds of the Destiny series. These maps are open-ended and focused on exploration. Players touch down in one of several Destinations, and are able to explore at will, along with taking on tasks assigned to them.[1] Minerals and other resources can be found that can be used on weapons and armor. This is a "lower intensity" game mode compared to others, as there are no Darkness Zones or other penalties for death.[2]

Players can bring a fireteam alongside them with two other people, but can also encounter other players while on patrol. Patrols are useful for gathering miscellaneous loot such as materials, consumables, hidden chests, or rewards for exploration missions. Missions can be acquired on patrol by locating and activating beacons, and are always available.

Patrol is available for the Cosmodrome, Moon, Venus, and Mars. The Taken King also possesses a unique patrol location for the Dreadnaught. 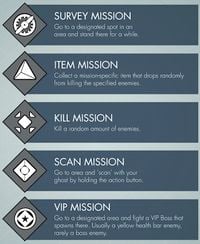 Patrol missions and their respective icons.[3]

Activating a patrol beacon will enable Guardians to complete simple missions for a small reward of experience and reputation.

If the player has completed several patrol missions, they can receive a mystery transmission where the player has to figure out how to unscramble a message (such as doing an emote, kill enemies, getting headshots, etcetera). The player is given an encrypted prompt on what they have to do and must figure it out for themselves.

Though not strictly limited to Patrol mode, Public Events always occur in public areas, usually following a predictable schedule. Only players who participate in the event while it is available will earn any rewards. Performance in Public Events is scored as Bronze, Silver, or Gold, and rewards are automatically granted to players upon completion. In Destiny 2, public events contain heroic objectives to complete and are expanded upon.

Some events, such as Blade of Crota summons, Queen's Wrath "Wolf Packs", and Taken Lieutenant attacks, can occur in Patrol mode as well, but they are not scored and their timing is random. These events are colloquially known among players as "World Events".

Lost Sectors are hidden dungeons scattered throughout the open worlds of Destiny 2, which include a variety of treasures and bosses that contain the key to them. Upon completion of a Lost Sector, players can attempt a specific Lost Sector on Legend or Master difficulties.

Adventures are side missions given to patrolling Guardians by free-roaming NPCs throughout the worlds of Destiny 2.

Flashpoints are a weekly event focused on one Destination. Play the specified activity there to complete the Flashpoint and earn a Prestigious Engram.

World Quests are a series of questlines that detail the story of the world they take place on. World Quests are generally long and detailed, only being playable after the player has completed the main campaign.

Treasure Maps are items that can be purchased from Cayde-6. They mark a location on an area's map where Cayde has hidden a stash of items.

Salvage Missions are Patrol missions that can be pursued by Guardians, which entail Guardians to salvage specific materials.

Challenges are heroic objectives that Guardians can pursue for rewards.