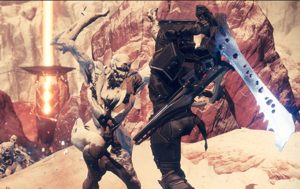 A Titan using a Hive Cleaver during the Escalation Protocol event.

Escalation Protocol is a guardian-initiated activity that can be triggered as a Public Event on Mars, where a team of Guardians defends a series of towers against waves of Hive. There are seven waves of increasing difficulty before teams can engage a final boss and end the event.

Found in the Hellas Basin region of Mars, players must trigger the Escalation Protocol event by approaching and interacting with the first tower plate. The tower will extend, and the event will begin. The players must then eliminate seven progressively harder waves of Hive enemies before facing the encounter's boss. After each incursion site the fireteam will have a chance to redeem a reward chest before continuing with the event.[1]

Some waves will include the added challenge of having to locate and disable Shadowrifts by standing within them and shooting Void crystals, similarly to the Witches Ritual public event on Titan. Certain enemies also drop Hive Cleavers, which Guardians may then pick up and use against remaining enemies.[1]

Escalation Protocol features five weekly-rotating final bosses, each with its own unique gameplay mechanic, similar to the Court of Oryx event from The Taken King. The event also includes unique weapons and armor that can not be obtained elsewhere.[2]

These bosses appear in a set order in Levels 1 through 6 and do not have any unique mechanics tied to them.

These bosses rotate weekly and appear at the end of Level 7, each with their own unique mechanics.

Players may earn rewards from participating in Escalation Protocol, including rewards exclusive to the activity.

A Decrypted Cache Key used to be needed to open the loot chest from the final boss of Escalation Protocol. They have been removed since update 2.7.0