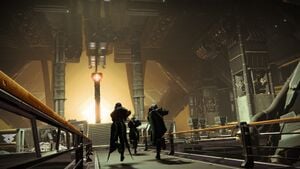 Heist Battlegrounds are the seasonal activity that were released alongside the Season of the Seraph. They follow The Guardian, Osiris, Mara Sov, Ana Bray, Elisabeth Bray, and Clovis Bray recovering pieces of Rasputin's Subminds from behind enemy lines in order to bring the Warmind back into the fight against The Witness and Xivu Arath. The playlist can be found at the H.E.L.M.[1]

During Season of Arrivals, the first of The Witness's Pyramid ships arrived in the Sol System and knocked out the Warmind, Rasputin. With the impending invasion of Mars, Ana Bray collects as much of Rasputin's data and constructs an Exo-like body to house it before fleeing the planet. Mars then disappears until the events of The Witch Queen where it plays host to The Enclave. With the reemergence of Mars, Ana Bray installs the Exo frame into the H.E.L.M. and attempts to fix Rasputin herself but fails. She realizes that she does not have enough experience to repair the Warmind and turns to the AI version of Clovis Bray on Europa for assistance. She sends the Guardian to punch a way through and finds the Vex, Hive, and the Fallen of the House of Salvation attacking the AI in an attempt to steal and use him for their own gain. With the invaders driven away, Ana takes Clovis to the H.E.L.M., installs him into the Exo frame, and comes up with a plan to repair Rasputin by reconnecting him to his Subminds.

All of the Heist Battlegrounds share a similar structure to each other. Players must fight their way through enemy combatants in order to access the bunker below. Once at the bunker, players must pick up PDT Refraction Cores and use them to destroy the Hive seals that block entrance. Once the seals have been broken, players will find themselves facing off against the Heist Commander. These Heist Commanders will pull up a shield when their health falls to 50% and so players will have to kill certain enemies to fetch Arc Charges and deposit them into a central terminal. When 5 of these charges are deposited, the bunker will activate one of its lasers and destroy the shield, allowing players to defeat the boss.

When the Heist Commander is defeated, a chest containing a World Drop will spawn. If playing in the playlist variant, another chest will spawn next to it. It costs 500 Seraph Key Codes to open and can drop any of the following weapons: