"I believe you're referring to Savathûn's Wellspring? Er, main source of Light distribution across the Throne World? "
— Fynch

The Wellspring is a six-man Arena matchmaking activity that takes place within Savathûn's Throne World, introduced with the launch of The Witch Queen expansion. It has two versions that rotate daily, The Wellspring: Attack and The Wellspring: Defend. It has both a Legendary and Master version.

The Wellspring can be unlocked by completing the quest Trust Goes Both Ways as well as The Witch Queen Campaign. It can be found on the right-hand side of Savathûn's Throne World map.

According to Fynch, the Wellspring is the Witch Queen's main method of distributing the Light throughout her Throne World. Further, Fynch stated that Savathûn specifically made the Wellspring to power a strong Light curse over the Sunken Pyramid, likely to keep Rhulk, a Disciple of the Witness, imprisoned. As such, the Wellspring is among the most heavily defended areas within the Lucent Brood's territory. However, following Savathûn's defeat at the hands of the Young Wolf, the Wellspring would be fought over by the encroaching Scorn and the Lucent Hive defending it. The Guardians would intervene to keep either from claiming the Wellspring for their own purposes, conducting operations whenever the Scorn launched raids to claim or destroy the Wellspring.

The Wellspring has different gameplay depending on which version of the activity you are completing. 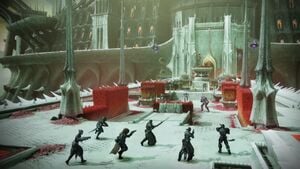 The attack version of The Wellspring first spawns in the players behind a wall of Hive magic along with three destructible Hive crystals along with a spot to place a Rally Banner. Destroying these three crystals drops the wall and begins the first part of the activity. In this first portion, the players must make it past a long bridge that is guarded by Acolytes, Shriekers, and a Lightbearer Acolyte.

After killing all the enemies, the players will then be launched upwards and be met by a Resonant Splinter covered in destructible hive gunk. After the gunk has been destroyed, the escort portion will begin. This splinter must be escorted throughout this portion of the mission. It will move on its own, but the more players are near it, the quicker it will go, and it will not reach the end in time if at least one player does not stay close to it. At various points along the path of the splinter patches, purple Void spikes that damage players that stand on top of them will appear. In order to remove these spikes, players can shoot a Hive crystal that hovers over each spike patch. The players will also be swarmed by constant waves of Acolytes, Thralls, Knights, and Wizards. After passing the steps, the players will escort the payload through a tunnel, destroying crystals and killing the constant waves of Thrall and Acolyte, the Revenant Knights bombarding them from afar, as well as a Lightbearer Knight, until the payload stops at a door protected by invulnerable crystals. The payload will charge up for a moment before exploding and destroying the crystals and the door.

Beyond the door, the Guardians will enter the Wellspring itself, with the daily boss kneeling in front of it, protected by an invulnerable shield. A Rally Banner can be planted before beginning the section. Before the boss can be fought though, their defenses must be brought down. To start the encounter, the three crystals near the boss must be destroyed. This will open three rooms to the sides and opposite the entrance of the arena, containing a hive ritual circle and an Patron of the Spring protected by an immunity shield in each. The players must stand on and guard these circles as waves of Hive try to interrupt them. Once all three circles have been protected for an adequate amount of time, the immunity shields on the Wizards will drop, allowing them to be killed, and they will drop a Void charge on death. Players will bring the charge back to the central arena and deposit them into the center pillar. Depositing these charges spawns another hive crystal floating in the air. Once all three charges have been deposited, the encounter ends, and the Rally banner can be positioned again.

To start the final fight, the three new crystals must be destroyed. The boss, either Golmag, Warden of the Spring, a massive Hive Ogre, or Bor'gong, Warden of the Spring, a massive Hive Knight, will rise and be vulnerable. After losing a quarter of their health, the Warden will summon an immunity shield and call upon more reinforcements. Players must kill a Butcher of the Spring to take their Void Charge and deposit it in the Wellspring to disable the boss's shield and continue damaging them. The Warden will do this three times throughout the fight for each quarter of health taken. The amount of Butchers that spawn will increase by one each time. After the third shield is removed, The Warden will no longer be able to go immune. 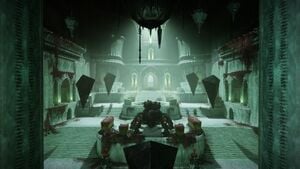 Guardians defending the Wellsping from the Scorn

The defend version of The Wellspring spawns the players into The Wellspring arena where they fought The Warden of the Spring. There is an area to plant a Rally Banner before beginning. In front of the players will be an interact-able artifact of Darkness. Interacting with this artifact will open the large door in front of the players and begin the activity. In the first part of the activity, the players must stand near and defend the Wellspring from waves of Scorn Raiders, Ravagers, Stalkers, Chieftains and Abominations. Two invulnerable Abominations are in the room the Scorn are coming from, and it is not recommended to stay there.

After the progress circle has been filled, the players will move on to the room that the large door leads to. There will be another spot to plant a Rally Banner, a large wall of Darkness energy that blocks the way, and an interactable artifact, Interacting with the artifact drops the wall and begins the next section. As the players move into the tunnel, a Crux of Darkness will spawn in front of them with two Pyramid Spikes that shimmer next to it. Destroying the two spikes destroys the crux and the players can progress. In the large room after, there will be five cruxes guarded by Scorn that the players must destroy before moving on. Each crux will be protected by an Abomination that needs to be killed before the spikes spawn. In the center of the room is a Scorn Walker that deploys an Arc energy shield when a leg is destroyed, forcing players close to it in order to continue damaging it while down. Throughout this section, constant waves of Scorn will spawn in order to impede player progress. Once the previous four cruxes have been destroyed, players will move down the steps to find the fifth and final crux will be at the bottom. Waves of Scorn will spawn, including Wraiths. Killing all the Scorn spawns in the spikes.

After the final crux is destroyed, another interactable artifact will spawn with a place to plant a Rally Banner. Interacting with this artifact begins a fight with either Vezuul, Lightflayer, a large Scorn Chieftan, or Zeerik, Lightflayer, a large Scorn Raider. Like the Wellspring: Attack bosses, these two bosses will rotate each time Wellspring is in its defend version and they share the same mechanics. The Lightflayer will spawn in with several Scorn. Dealing enough damage to the boss will cause them to put up an immunity shield and teleport down to the bridge below. Players will chase the boss across the bridge while fighting through several waves of scorn. Along the way, cruxes will spawn with spikes surrounding them. Once the crux is destroyed, the immunity shield will drop and players can damage the boss. After bringing the Lightflayer down by one-third of its health, the immunity shield will reappear and it will move further back along the bridge. This process repeats two more times per one-third of health with the number of spikes needing to be destroyed going up by two each time. After the final crux is destroyed, The Lightflayer will no longer be able to go immune.

On Wellspring: Attack, Hive Champions will appear, including both Barrier Knights and Unstoppable Ogres. In addition, Knights will have Arc shields.

On Wellspring: Defend, Scorn Champions will appear, including both Overload Chieftains and Unstoppable Abominations. Modifiers may give Raiders Void shields.

There are currently four weapons obtainable via The Wellspring. All four can be crafted at The Enclave. These weapons rotate on a daily basis.