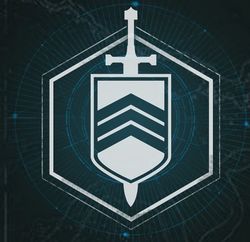 "Strikes are the backbone of the Vanguard's response to the Darkness. Each mission is planned for maximum disruption and hindrance of enemy lines. Your Strike service directly impacts our ongoing war with the Darkness. So serve well."
— Commander Zavala

Strike is a cooperative mode featured in Destiny. Strikes represent a middle ground in PvE content between Story missions and Raids in terms of length and difficulty, and are optimized for a fireteam of three players. Usually, Strikes are composed of a linear series of enemy encounters which may or may not include a mini-boss, culminating in a battle against one or more bosses supported by additional enemies.[1] Some of the newer strikes feature simple puzzle mechanics that make boss fights more challenging.

As of The Taken King, Strikes have a chance to drop Strike-specific loot that can help gear players up in preparation for Raids. Playing in a Strike playlist continuously increases the chances of better loot on consecutive strikes.

Higher-level versions of each Strike are available in the Strike playlists. Entering a playlist will launch a random Strike alongside two matchmade players.

These playlists were available during Year One of Destiny, and incorporated all available base game and expansion Strikes. Playlists at higher levels offered greater rewards.

The Taken King replaces all Year One playlists with the following:

Destiny 2 features four Strike playlists apart from the Nightfall. Legacy Strikes are unlocked after completing the Story mission Fury and returning to The Farm to speak to Commander Zavala, Only for Non Forsaken Players. Level 30, Level 40, and Level 50 are unlocked after buying Forsaken. Every Playlist has modifiers.

A random Strike is selected each week for the Nightfall Strike, a high-difficulty challenge with the Nightfall and Epic modifiers active in addition to three other randomly-chosen modifiers; after The Taken King is released, the latter three modifiers will be manually selected by Bungie each week instead of randomized. Nightfall Strikes do not include matchmaking, requiring players to fight alone or assemble a fireteam of three before starting. Rewards include Legendary and Exotic gear.[2]