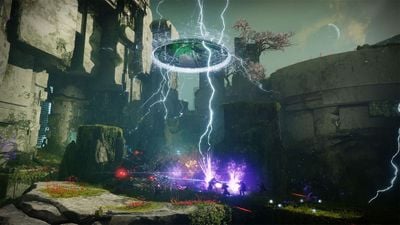 With the release of Season of Dawn, Vex Offensive was removed from the game and was replaced with The Sundial activity on Mercury.[2]

There were three rounds to the arena. For the first two rounds players had to hold off waves of Sol Divisive Vex. After enough Vex was killed, Gate Technicians spawned, along with Fanatics and Supplicants. Killing the Gate Technicians dropped Void Craniums that Guardians had to pick up and use to destroy the Oracles. During the first round 6 Oracles spawned, and 12 spawned in the second.

During the third round the players fought a Minotaur named Crotheon, Gate Keeper. The mechanics from the first two rounds remained in the third, meaning players had to kill the Gate Technicians and get the Void Craniums. Players had to use the Craniums to take down Crotheon's shields, giving them 30 seconds to damage it before they recharged. During the battle, Crotheon rotated between three points within the boss area, meaning players had to move regularly.

The Final Assault version of Vex Offensive played the exact same, but the final boss was the Undying Mind rather than Crotheon. The only difference in the boss fight was that the Mind summoned Seekers during damage phases.

Each round unlocked chests that gave either random rare gear, or Season of the Undying gear. This includes: