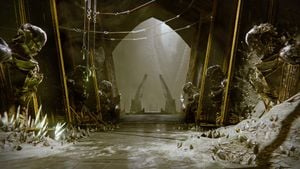 The Court of Oryx.

"The Court of Oryx. The most powerful of his army. He would hold the Court in reserve. Allow the mass of the Hive to tear down a world. Then, he would open the gates and unleash the Court upon a weary and battle-scarred race. Fear is a powerful weapon, and one the King uses all too well. "
— Toland's Journal

The Court of Oryx, the High War, is the throne world of Oryx, the Taken King, as well as the King's personal entourage. It consists of some of Oryx's most powerful champions. When the Hive invaded a world, the Court would be held in reserve until the end, when they would be unleashed to deliver the killing blow to a battle-scarred and weakened civilization.[1] The Court also represented a vital source of tribute to Oryx, keeping his worm sated.[2] Anyone could come and challenge Oryx or his courtiers to prove oneself worthy by the rules of the Sword Logic.[3]

In Destiny: The Taken King Guardians could summon Oryx's champions and fight them on the Dreadnaught in the form of a Public Event.

"I shall establish a court, and whoever comes into this court may challenge me. My court will be the High War. It will be a killing ground and a school of the sword logic we have learned from our gods."
— Auryx, King of the Hive

Oryx established the High War 20,000 years after the fall of Fundament, when the Hive encountered alien life for the first time beyond their homeworld.[3] Members of the Court fought during the Golden Amputation, and the Court itself was briefly usurped by Savathûn and Xivu Arath during their attempted coup afterwards.[4][5] The Court was the first to hear of Oryx's plan to move his throne world into a Dreadnaught.[6] It later pulled down the Gift Mast, signifying the end of the Harmony civilization.[7]

In contemplation, Oryx realized that he had come to depend too strongly on his Court and other large sources of tribute for survival. He accepted that if the High War was destroyed, his own death would shortly follow, and reasoned that this was proper: if the Court fell, it meant they had been weak, and if the Court was weak, then he had been a bad king.[8]

The court consisted of Oryx's champions, but also his family: niece Balwûr and nephew Malok, granddaughter Hashladûn, and children Ir Anûk, Ir Halak and at one point Crota.

The Court of Oryx is a guardian-initiated activity that can be triggered as a public event in the Hall of Souls on the Dreadnaught that summons an assortment of powerful Hive and Taken enemies. These events must be initiated by offering either a Reciprocal Rune, an Antiquated Rune, or a Stolen Rune.

The Court of Oryx can be found at the central dais of the Hall of Souls, where a rupture portal to Oryx, the Taken King's ascendant realm stands; this is the same portal that must be opened at the beginning of the King's Fall Raid.

Players cannot enter the court proper, as the floor is covered in flames. To enter and initiate the event, one of the players must offer a rune to one of the different statues. The rarity of the runes determine the difficulty of the encounter. The summoner then must stay within the Court of Oryx, or else the boss will despawn after fifteen seconds.

Note that for Tier Two bosses, rare Stolen Runes are needed, but they need to be charged up first by defeating three Tier One bosses.

After the boss has been defeated, a chest appears in the middle of the room. The player who sacrificed the runes will get the highest reward, but all players who participated, including those who joined outside the initiating player's fireteam, will receive a reward.[10] The last person to place a rune will be prevented from placing another for forty seconds, allowing another person to place a rune and initiate the event.

Within the Court, there is a chest directly beneath the main platform that bosses spawn from. It can only be opened with a Key of Gnashing Teeth.

Important Note: While the Court allows for a maximum of nine players to compete in the Court, the game's matchmaking system is such that one solo player in a single instance takes up three spaces. This means that a player should bring with them a full fireteam if they want to maximize the number of people who can participate.

The Tier 3 boss rotates every week.