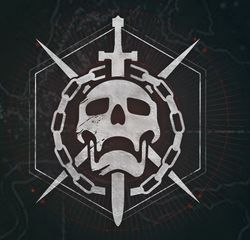 "Some evils you cannot fight alone. Join with other brave Guardians to quest deep into the heart of Darkness and confront threats beyond imagination. Steel yourself. You will be tested to the very edge of your strength."
— Grimoire Description.

Raid is a game mode of Destiny. Raids are 6-player cooperative assassination missions that are of high challenge, and require communication between players to succeed.[1] They involve specific quests for groups of fireteams.[2] No waypoints or explicit objectives are provided.[3] Raids typically involve epic, climactic encounters against various bosses, culminating in intense final battles against legendary bosses across the Destiny series.

Raids differ from Strikes in a few ways:

Two difficulty levels exist for raids: normal, and hard (Prestige). The normal mode must be completed before the harder ones can be attempted. This means that players who have completed the normal difficulty cannot take players through the hard mode even if they are the fireteam leader. The normal mode is designed to teach players raid mechanics, and how to operate as a team. The hard mode provides tougher enemies, additional objectives and a harsher death penalty.[3]

Raid Lairs are a Raid activity that debuted in Curse of Osiris. Like Raids, Raid Lairs are six-player activities that feature puzzles, challenging bosses, and exclusive loot, as well as Normal and Prestige difficulty options. Where Raid Lairs differ is their length: they are designed to be shorter encounters than full Raids: Eater of Worlds is approximately the same length as Crota's End, while Spire of Stars is slightly longer. Raid lairs were vaulted with the release of Beyond Light.

Players need to assemble their fireteam before entering a raid. If desiring to begin from a specific checkpoint in a raid, ensure that the Fireteam leader holds that checkpoint.

There is a checkpoint for every encounter completed, allowing players to return to the raid on other days, within a week (see lockout below). Players should agree upon how much progress they will make in each session if they don't plan on completing the raid in one session.

Unlike all other activities, the Raid game mode employs a weekly lockout for earning loot. This means two things:

Completing a raid rewards players with items not found elsewhere in the game. For example in Destiny 1, Ascendant upgrade materials are common in chests, used to upgrade Legendary equipment, and some chests also have a chance to have an exotic weapon. Each encounter also rewards a raid-specific legendary weapon or piece of armor. Completing the raid on a higher difficulty mode will yield the best rewards, such as armor upgrade materials or Adept weapon variants. Aesthetic items such as shaders, emblems, ships and Sparrows are also given.

When Beyond Light was revealed, it was stated that many destinations were going to be 'vaulted' as part of the Destiny Content Vault, or DCV. This included all raids other than Last Wish and Garden of Salvation.[8] When Bungie Day and Moments of Truimph 2020 came around, the weekly raid reward lockouts were removed for the soon-to-be-vaulted raids, and players could farm as much as they wanted. The armor from these raids were given the Season of Arrivals max infusion cap, and so were the weapons and armor from Garden of Salvation and Last Wish.[9] As of The Witch Queen, no expansions or raids will be vaulted, starting from Shadowkeep, allowing players to experience and play the The Light and Darkness Saga in its entirety.