From Destinypedia, the Destiny wiki
Jump to: navigation, search
"I don't have time to explain why I don't have time to explain."
This article has new content coming soon from Shadowkeep and may not be complete, confirmed, or correct. Please update it as soon as any relevant and accurate material is available. Editors must cite sources for all contributions to this article. Edits that do not follow this standard will be reverted without notice. For more information, see the Citation Policy.

The Scorn are a horde of undead Fallen led by Fikrul, the Fanatic and Uldren Sov. They orchestrated a massive breakout from the Prison of Elders and murdered Cayde-6 in the process, and have since spread throughout much of the Reef and the Dreaming City.

Capitalizing on the lack of leadership in the post-Taken War Reef, a group of Dregs who collectively titled themselves the "Scorned Barons" banded together after they were cast out from the House of Exile. They waged a civil war against the Fallen Houses for practicing the old Eliksni ways and terrorized Awoken settlements within the Reef, degrading the once prosperous civilization into a lawless frontier. The terror they unleashed had almost grown as powerful as any Kell even having driven the House of Wolves to extinction through the destruction of all their Servitors. They even successfully took control of a local Hive brood when Hiraks, the Mindbender took In Anânh, Brood Queen as his consort.

Sometime before the Red War, acting Regent-Commander Petra Venj enlisted the support of the Hunter Vanguard Cayde-6, and with the assistance of a small group of his most trusted Guardians, together hunted down the Scorned Barons. At a final standoff, the Barons were defeated and those not killed were thrown deep within the Prison of Elders. Only one at the scene, their Archon, Fikrul, the Fanatic, managed to escape.[1] The Barons bonded together here in their shared situation.[2] 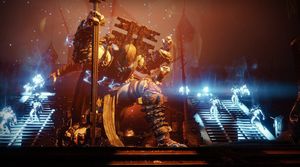 The Scorn Baron, Fikrul, the Fanatic

At some point following the Taken War, Prince Uldren, who had been corrupted by Darkness and was working with the House of Kings, discovered a mortally wounded Fikrul. Uldren wished to save him, attracting the attention of the Taken Ahamkara Riven. Riven granted Uldren's wish, and part of Uldren's Darkness transferred into Fikrul's Ether, raising him as the first of the Scorn.

Fikrul and Uldren became allies and worked together to usurp Craask, Kell of Kings, immediately taking over the House of Kings; Fikrul docked the latter of his arms and demoted Craask to Dreg status before slaughtering the House in a grand betrayal as Uldren decides that the Kings are too bothersome for his ambitions. With the use of Dark Ether, Fikrul raised the deceased Kings as a new army of undead Fallen to lead, which became known collectively as the Scorn. 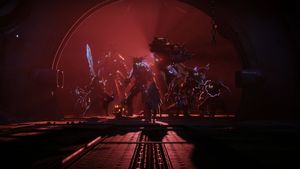 Prison Break of the Scorned Barons with Uldren Sov

A year after the Red War, both Uldren and Fikrul were caught by Petra and Cayde-6, willingly surrendering themselves and taken to the Prison of Elders. During the warden's interrogation of Fikrul on the whereabouts of Kaliks Prime, the former prince took advantage of Variks' waivering loyalty and tricked him into releasing the prison's inmates, causing a massive riot in which The Guardian and Cayde-6 were forced to contain, unaware of the Scorn sent to release their jailed commanders. During their escape, Cayde-6 was confronted by Uldren and the eight Scorned Barons in a tense standoff, to which Uldren finished the Hunter Vanguard off with his own Ace of Spades.

After the escape, the main horde of Scorn fled into the Tangled Shore behind the leadership of Prince Uldren, Fikrul and their seven commanding Barons .[3] Without the sanction of the Vanguard, the Guardian took it upon themselves to avenge the fallen Cayde-6 and hunt down the Scorned Barons throughout the Tangled Shore.

"Divide. Conquer. Isolate Uldren. He'll wind up at your feet. And all you have to do... is pull the trigger."
— The Spider.

After their release, the Scorn entered into a war with the Spider for control over the Tangled Shore, and forcing the Fallen crime boss into a deal with the Guardian and Petra Venj for information on their whereabouts. The Guardian drove the Scorned Barons out of their den and scattered them across the Shore, taking out their forces bit-by-bit and soon discover each Baron had plans for when they would be done with the Reef.

Encountering a trail left by Araskes, the Trickster, the Guardians discover the Trickster developed a wicked plan to sabotage engram caches with explosives which she intended to send to the Last City and incite mayhem. The Guardian manages to destroy her caches and chase the Trickster throughout the Shore and corner her. Despite her cloaking and constant traps, the Guardian was able to kill Araskes.

Later on, the Guardians find fiery trail blazes over the Shore and soon find the one responsible, Yaviks, the Rider and her Pike gang. Within the Shore, Yaviks intended to continue her trail of destruction and anarchy over the Reef while also wishing to beat Cayde-6's Pike riding record since last time, the Hunter Vanguard bested her. The Guardian manages to procure a Pike of their own and initiate a destructive race with Yaviks. But, despite Yaviks' modified Heavy Pike, weaponry and the aid of her gang, the Guardians were able to kill the Rider, thereby preserving Cayde's record.

Following intel provided from the Spider, the Guardians follow evidence of Pirrha, the Rifleman, the one who killed Cayde's Ghost. The search leades the, Pirrha's initial sniper's nest in Hellrise Canyon. Once they enter, the Guardian realize the nest was a trap as Pirrha's forces attack them. Surviving the trap, Pirrha contacts them, threatening to destroy their Ghost just as he did with Cayde's. Fighting past Pirrha's forces and keeping their Ghost safe from Pirrha's sniping, the Guardians manage to corner the Rifleman. Despite his Crossbow weapon and bothersome decoys, the Guardian kills Pirrha, avenging Cayde's Ghost.

Within the fields of the Tangled Shore, the Guardian finds remains of Servitors, completely drained of their ether. The Spider takes this as evidence that Reksis Vahn, the Hangman, a Scorn Baron with a hatred for Servitors, is nearby. Following a trail of ether to Quitter's Well, the Guardians encounter the Hangman within his lair. Despite his great strength and Flame Cauldron weapon, the Guardian manages to slay the sadistic Baron.

With the Machinist's death, the Scorn's leadership has been reduced to Fikrul, the Fanatic, the Scorn's Archon, and Uldren himself.

Meanwhile, as the Guardians continued their vendetta in the Shore, Petra maintained her own hunt for Uldren. She managed to track him to Earth deep within the Dark Forest of the European Dead Zone. There, she witnesses him taking a shard of the Traveler bearing its Light. Though she managed to find Uldren, Petra failed in her chance to kill him, leaving her position exposed to the Dusk Fallen and enabling Uldren to escape.

With the death of the Scorned Barons, Uldren escapes and walled himself inside the Awoken Watchtower, to find his sister, Mara Sov. Guarding the structure was his Scorn forces, led by Fikrul, the last Scorn Baron. When The Spider's agents heard of this, The Spider's Crime Syndicate, under the command of The Guardian and Petra attacks the Scorn. In his final battle, Fikrul questions the Guardian's motives to kill them for revenge, or just outright. However, despite his Dark Ether powers, the angered Baron was slayed, and the Guardian continued to find Uldren. Upon arriving at the Gateway, they only to find a horrific Chimera, named the Voice of Riven had captured him after using the rogue prince in releasing it. Despite the Taken monster's powers, it was destroyed, saving Uldren. Left crippled and defenseless, Uldren questions his killers' motives and says that despite his crimes, what he has done was for his sister. Uldren was executed then, leaving the Scorn broken.

Residing in the Dreaming City[edit]

After Uldren's death, remnants of Scorn retreated from the Tangle Shore and fled towards the Dreaming City to pillage, only to be traced by other Guardians and exterminated by the bounty orders of the Spider and Petra. To make their matters more troubling, the Scorn became involved in a heated conflict with the Taken that have plagued and cursed the Dreaming City.

In addition, some Hive formally under Hiraks's command began fighting against the Scorn in the Jetsam of Saturn. Although the attack didn't go well as the Guardians did a “favor” for the Spider, eliminating the Hive’s forces and their Brood Queen.

Despite the Scorn falling numbers, leadership finally came back in place, as Fikrul supposedly returned from death for revenge. Fighting through the Scorn, a strike team entered The Hollowed Lair, with Fikrul challenging them. Despite his hatred and Dark Ether powers, the Guardians defeated the Scorn Archon once again but he swears that he will return, no matter how many times they strike him down.

Another Baron, Elykris, the Machinist returned, but this time under the title "Reanimated Machinist". Despite her return and weaponry, she was killed again. Despite the return of Elykris and Fikrul, the Scorn's power and numbers continue to dwindle as the Guardians continue to keep them at bay.

The Scorn are created from deceased Fallen, either recently or after repeated deaths, reanimated by Fikrul, the Fanatic through the use of Dark Ether and transformed into warped, undead monstrosities.[3][4] Described as "frenzied, bloodthirsty puppets" by Petra Venj, they are unwaveringly loyal to the Barons and Uldren and throw themselves into combat with little care for self-preservation. Many of them have died and been resurrected multiple times, becoming increasingly deranged each time, coupled with progressive physical changes that eventually turn them into bestial Screebs.

Scorn vary drastically in size and form, with Abominations in particular nearly being the size of a Hive Ogre.[3][4] Many of them have docked lower arms as a remnant of their previous status as Dregs.[4] Rather disturbingly, some Scorn classes, including Ravagers and Abominations, seem to also lack heads. It could be possible that their interaction with the Dark Ether has allowed the Scorn extra sensory abilities as every class of Scorn have some kind of metal plating covering their eyes, aside from screebs that wear no armor and the Barons.

Scorn generally wear crudely-fashioned armor fastened with chains and painted gray or ochre. Many of their unique devices and weapons follow a similar aesthetic, consisting of metal plates bolted or welded together.

The first Scorn were former members of the House of Exile who were cast out of the House at some point prior to the Red War. The Scorn are no longer affiliated with any House. They are led overall by Uldren Sov and help pursue his goals. Beneath Uldren are eight Barons, led by the former Archon known as Fikrul, the Fanatic. Each of the Barons has a unique set of skills and combat specialties.