"The second fleet will wait no longer. Commencement will begin on their arrival."
— Cryptarch translation of Skyburner chatter

The Skyburners are the "celestial demolitions" fleet of the Cabal legions on Mars. They are mainly based around Phobos, with limited deployment on Mars.

In the base game, they are only encountered during the final phase of the Cerberus Vae III and Dust Palace strikes. The Skyburners play a larger role in The Taken King expansion.

"The fate of the Cabal is as mysterious as Vertigo itself– the Guardians detected no catastrophic malfunction, no disease, and no bodies aboard any of the fully-supplied ships."
— Vertigo

Initially the Skyburners were fought sparingly in the base game, only found guarding high value Cabal Commanders, such as when Valus Ta'aurc dispatched the elite Ice Reapers to hunt down Rasputin, the Skyburners accompany them as well. The Valus himself even used Skyburner soldiers as his personal guard until his assassination. In both cases however the Skyburners suffered total casualties.

As a Scout Legion, the Skyburners once sent a expedition to Mercury on the Crucible map Vertigo, but later went missing by unknown mysterious circumstances. With only their ships, weaponry, and supplies left intact at the location.

"Whatever it was, it turned Cabal against Cabal, wiped out their base in minutes. How long would we last?"
— Commander Zavala

When Oryx began blighting the system, the Skyburners were the first Cabal units to encounter the Taken after noticing strange activity. Shortly after, huge numbers of Skyburners were Taken and made to fight their comrades forcing Legion commander, Primus Ta'aun to order a mass evacuation.[1][2]

Ta'aun then sent a report written by his intelligence officers on the ineffectiveness of conventional Cabal forces against the Guardians, and suggested that the technology aboard Oryx's Dreadnaught might be co-opted by the Cabal to nullify Guardian Ghost regeneration.[3] He also delivered reports of the massive casualties suffered Dust Giants, Blind Legion, and Sand Eaters Legions on Mars. This prompted the Cabal Emperor himself to order Primus Ta'aun and his bond brothers to board the Dreadnaught and kill Oryx, the Taken King, by any means necessary.[4][5]

""Mutiny," Tlu'urn whispers. "You should mutiny."
"No," Ta'aun says. Duty is victory. Mutiny is worse than death. Even if death seems certain."
— Primus Ta'aun and Valus Tlu'urn

Shortly after receiving those orders, Ta'aun commanded the defense of one of the Cabal frontlines on Mars alongside one of his bond brothers, Valus Tlu'urn. Together they went from bunker to bunker to motivate their soldiers and call artillery fire upon the advancing Vex. As they took cover behind a destroyed Interceptor and fired upon their foes, Tlu'urn questioned if Ta'aun intended to follow through on his orders, arguing it was madness and suicide. As he pulled his bond brother out of the line of fire of several Hobgoblins and back into cover, Ta'aun revealed to him that Ghaul himself had approved the order, shocking Tlu'urn. As a Minotaur breached their lines, Ta'aun unloaded his weapon onto it, screaming a war cry as he poured out his fears and concerns over the upcoming mission. As his legionnaires cheered the machine's destruction, Tlu'urn noted that they were only scouting legions and did not have the numbers for such a mission before suggesting that they mutiny. Although the prospect of doing so appealed to Ta'aun, he felt that ignoring his duty would be worse than death and refused.[4] 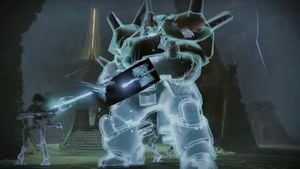 "It came from the Emperor Himself. I'm ordered to board and capture the Hive flagship. At any cost."
— Primus Ta'aun

After the calamity of the Battle of Saturn, the Skyburners crashed their warship, Dantalion Exodus VI, into the Dreadnaught's hull, and protracted a war of attrition deep behind enemy lines against the Hive. By establishing a beachhead the Cabal were able to move deeper into the Dreadnaught and soon learned that Oryx could only be reached through a portal they called a "Rupture". Primus Ta'aun decided to lead a team to the coordinates. As the Primus pushed near the portal entrance, his team was assaulted by Oryx's forces and the Primus himself was Taken.[6]

The Darkness spoke to Ta'aun during the Taking process, declaring that he was free now of his duties and noting that his code and valor had not been enough. It offered him a "knife" to cut away his bonds of duty and love to stand on his own.[7] Now transformed into a Hand of Oryx, Ta'aun was paired with another Hand, the Taken Ogre Baxx, and placed by Oryx to guard the Rupture that led to him. Later Ta'aun was slain by the Guardians, freeing him of the Taken King's control.[8] 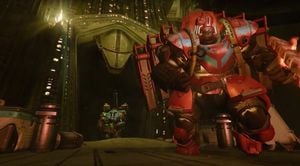 The Shield Brothers enter the core of the Dreadnaught.

"So the Centurion's bond brothers are pretty angry they lost their commander. They're leading a team to blow up the Dreadnaught's core. Core goes... most of the system goes with it. You're going to make sure that doesn't happen."
— Cayde-6

The Skyburners Legion continued to fight a hopeless war of survival aboard the Dreadnaught, all in the name of their mission that their Emperor placed upon them. The fate of Ta'aun was unknown to his Bond Brothers. Growing desperate, Ta'aun's chief lieutenants and Bond Brothers, Valus Mau'ual and Valus Tlu'urn, launched an extreme plan to destroy the Hive and Taken by placing explosives on the Dreadnaught's power core. Whether to force the Hive into submission or to retrieve their lost Primus, the Brothers plan of destruction would be strong enough to create a blast capable of wiping out half the Solar System. Wishing to avoid this, the Guardians formed a strike team to disable to explosives before they could detonate. Reaching into the core, the Guardians faced off against both of the brothers, who were determined to finish their mission and avenge their Primus. Despite their fire power and formidable tag teamwork, the Guardians prevailed against the Valus's and saved the System.[9]

The Guardians also disposed of their champion Valus Tau'ugh. The remaining Skyburners, in desperation, sent a distress call directed to the head of the Cabal Empire, Dominus Ghaul, to inform him of their casualties and findings. Although the Guardians intercepted the signal, the message had already been received by the Cabal Empire.[10]

Years later, the Cabal would ultimately answer the signal, leading to the beginning of the Red War. While severely diminished, the Skyburners survived long enough to see Ghaul and his Red Legion arrive in the system. What became of them is unknown, but they considered their survival "victory enough."[11]

Skyburners can be identified by their teal and red armor. The legion's most unique feature is the crest on their helmets. They also possess the unique Psion Burner units, which feature red armor and a curved spike on their helmets. 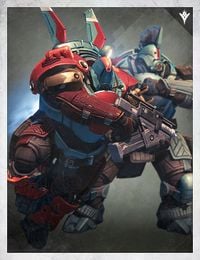