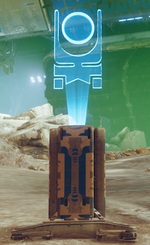 The Rite of Proving is a trial-by-combat gladiatorial system intrinsic to the older Cabal Culture and Tradition and heavily favored by the Praetorate.[1] It is used to determine leadership and able commanders along with to sort rivalries. The tradition became corrupted under Emperor Calus' rule and faded by the time of Dominus Ghaul's coup.[2] Under Empress Caiatl's reign, the Empress has employed the re-use of the tradition to recruit willing Cabal into her War Council. The tradition directly ties into the Cabal Bell of Conquests.[3]

The Rite of Proving is an ancient Cabal rite of passage that dates back as far as the Era of Lead, the time period before the Cabal expanded beyond their home system. During a rite, two Cabal, or their anointed Champions to serve as their representatives, would in public assembly announce their rivalry and/or grievances, with one or both sides issuing a challenge. The two Cabal would battle until one side conceded or was killed, with death being more commonplace than submission, the winner being seen as the rightful and "lawful" party in the dispute. Rites of Proving were undergone in Proving Grounds or Grand Arenas where contenders would ring their Bell of Conquests, or the War gong - an elaborate gong cast from multiple Bells - if the Grounds held one. Several trials to enhance the ability and grant privileges one could use in Rite combat also existed and were held most often by the warrior elite as nature and law of the Bell of Conquests.[4][5] With the implementation of a Hammer of Proving, those who lay claim to their foe may also, rightfully, lay claim to tribute of their possessions.[6][7] 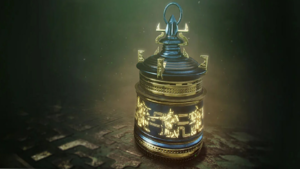 The Rite of Proving rose to great prominence during the Era of Lead, the era in which the Cabal had yet to expand beyond their home system. Before being fleshed out into the intrinsic of Cabal culture it would soon become known for, the Rite of Proving's origins based itself in the traditions and history of the Bell of Conquests and scal'sangus - a blood-etching art of the Cabal culture. In the earliest days known of Cabal history, Bells commemorated martial feats and victories and it was Cabal sport and culture to don and display trinkets and adornments of one's vanquished foes. These adornments ranged widely, just as much as the style of bells, with the low rungs of Cabal mercenaries wearing the carved teeth of their foes stitched into their leather, and the higher rungs claiming even the torso of their opponents to preserve and display as busts. For those seeking Rites, Bells of Conquest were commonplace and given at a warrior's first blood, with those who wished to challenge a warrior in Rite combat having to ring their bell seven times.[8]

Rites of Proving would extend into the galactic-colonial period and cement themselves within Cabal culture and tradition, with the bearing of War bells and placement of Proving Grounds increasing. The adornments of Bells would grow even more ornate with many being encrusted, gilded, or plated. This increased the incentive for combat, as Rites of Proving had evolved from being only to settle grudges to now usurp one of their privileges, powers, and societal/political standing. However, as the scale and logistics of warfare increased as the Cabal Empire expanded its borders and became the expansionist Imperial regime it was under the influence of the Praetorate, the practicability of claiming war bells and holding Rites became increasingly more difficult to manage and commit to.[9] To assuage this decreasing practicability despite the innate desire to continue tradition, multiple war bells would be melted down and cast into even more elaborate War Gongs where specific rituals and Grounds would be held for rivals spacefaring.[10] This meant even amongst Scout Legions or transit, Rites could exist. 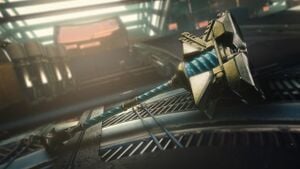 In accordance with a Cabal Legal Record, The Codex of Lawful Transgressions, it is revealed it was the implementation of radical changes to the Rite of Proving that inevitably resulted in its decline in usage and the increase the distaste and scorn for he who destroyed and abused it. In the beginning of Emperor Calus' reign, an era known as the Foundation Age of his rule, he sought to turn the Cabal away from the militaristic and martial ambition that dominated their culture and move them towards one of literature, philosophy, and art. Yet Calus - just as similarly as Dominus Ghaul would centuries later - saw that when dealing with the Cabal, a people hardly deterred, his change would have to be subtle and not absolute abolishment. Calus began his incremental implementation of bylaws over continuous years with his first being the implementation of an Imperial Arbiter (Proving Arbiter) to Rite of Provings. The "impartial" Arbiter would carry a hammer of the Imperial Office and would decide the victor in a tie or scenario where both sides conceded. Although the addition of the Arbiter and this first change was widely accepted, the following changes that would corrupt the Rite of Proving were increasingly seen with bitter distaste or contempt.[11][12]

Abusing the addition of the Arbiter, Calus continued to implement further means and flimsy justifications at which he could steer the outcomes of Rites. These egregious justifications and changes consisted of the ability to balance "unfair matches", ceasing Rites and matches that went "overly long", and requisitioning and punishment of one who owed debts to the Empire. The obstruction, abuse and corruption of the Imperial Arbiter created resulted in the Rite of Proving falling in usage after a century and onwards as it was seen as unsustainable. This would eventually result in the role of Proving Arbiter being retired and their respective hammers returning to the vaults of Calus.[13] Calus' effect on the Rite of Proving would create a chasm so vast that even upon his exile and the instatement of Dominus Ghaul, a figure who elevated the martial and militaristic traits of the Cabal to fanatical industrialism unrivaled by any other leader, the Rites remained dissolved in usage.[14]

With the arrival of Empress Caiatl into the Solar System, the Cabal Empress, vying for power and unification over the tenuous Cabal climate, reinstated the ancient Rite of Proving - the original Rites before Calus' debauchery had corrupted it - though some of Calus' reforms did stick, and she did add some of her conditionsm, for example no criminals, debtors or scoundrels were allowed, nor where cheap shots, tricks or unfair advantages like wounding your opponent pre-fight, as well as the option for a non-lethal fight. Caiatl offered to the remains of the Red Legion and Cabal in Sol the opportunity to join her War Council and prove themselves as mighty warriors and commanders. Many Emissaries flying her banner and contenders, Rite aspirees, would flock to her call. Notable were Commander Dracus and Ixel, the Far-Reaching on Nessus, where a Proving Ground had been erected in The Tangle, Basilius the Golem on Europa, and Val Ma'rag in Cosmodrome. Challenged to a Rite of ceremonial combat after weeks of conflict, Caiatl would send forth Ignovun, Chosen of Caiatl as her anointed representative to challenge the chosen Champion of The Last City in the Proving Grounds inside the Halphas Electus.[15][16]

After the events of Operation: Elbrus and the appointment of Saladin Forge as representative of the Vanguard to Caiatl's War Council, many other members, displeased by the presence of a Human among their ranks, would challenge the Iron Lord to the Rite of Proving. Saladin's repeated victories saw him rise meteorically through the Cabal military, soon claiming the rank of Valus after defeating Guh'rn Or'Ohk in the Rite.[17]

The victor who completed the trial is allowed to bring a trained war beast into a duel.

The survivor of a trial of The Flayed Night is allowed to cut their opponent twice across the stomach.

The one who withstood the Cold Iron Mouth trial was given the privilege of coating their blades in caustic white ash.