The House of Exile were a fringe House of the Fallen, distinguishable by their green cloaks. 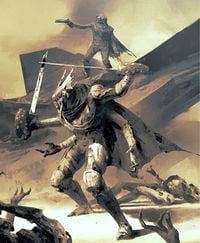 The Exile Baroness and Cayde-6

"With the exception of the House of Exile, the Fallen usually try their best to stay out of each others' way. That's why the system is parcelled up so neatly. Winter on Venus, Exiles on the Moon, Kings and Devils keeping to their own areas of the Cosmodrome."
— Ghost

The House of Exile was a smaller, newer House, made up of the malcontents and renegades of other houses after their sparking defeat at Twilight Gap. They attempted to carve out a realm for themselves on the surface of the Moon, in spite of the heavy Hive presence.[2] The Exiles served no Kell or Archon, making them an abnormality among the Fallen.[3]

During a mission on the Moon, Cayde-6 met a Baroness of the Exiles, whom he later fought alongside.[4] 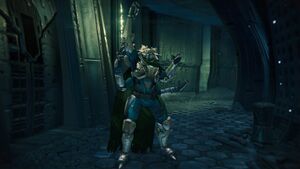 "Frigoris was a wild card, and needed to be taken care of. The City can rest a bit easier with this threat removed."
— Bounty

When Guardians first returned to the Moon after years, they discovered the House of Exile squatting among the ruins of the old Moon bases.[5] Later, when attempting to breach deep into the Hellmouth, a Guardian was caught in the middle of an Exile raid against the Hive. Leading the raid was Frigoris, Exiled Baron, who became a priority target due to his station in the Exiles, and was dispatched by the Guardian.[6]

"He may seek to gather the Exiles, but they will not follow. They follow none, no Kell, no Archon."
— Variks, the Loyal

During the House of Wolves revolt against the The Reef led by Skolas, Kell of Kells, the Exiles were not approached to join in Skolas' rebellion. Variks, the Loyal noted that the Exiles would not have joined the Wolf Rebellion because they followed no Kell.[7] Skoriks, Archon-Slayer also refused to follow Skolas and attempted to join the Exiles. However, he was dispatched by a Guardian sent to hunt him down before he was able to.[8]

At some point prior to the Red War and the creation of the House of Dusk, eight Dregs of the Exiles were cast out. They banded together in the Tangled Shore and founded the Scorn, a group of exceptionally violent Fallen pirates.

It is implied that most, if not all of the surviving Exiles have now joined the House of Dusk.[9]. As of the Red War, there have been no evidence of Fallen on Luna until Shadowkeep, where the House of Dusk had claimed the former territory of the House of Exile, including the former Ketch of Taniks. 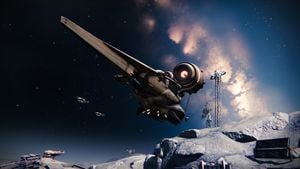 The House of Exiles is an abnormal House due to the fact they do not follow any Kell or Archon by choice.[10] It is unknown how the House maintains its unity without proper leadership amongst its disparate Barons, or if the House has a Prime Servitor that allows for the House's supply of Ether to be secure.