Ketches are massive starships used by the Fallen for interstellar travel and housing. The Fallen arrived on these ships in the wake of the Collapse, disembarking to pillage the remnants of human civilization.[2]

The Awoken of the Reef also employ Ketches captured from the Reef Wars, as a number of Ketches in Reef livery participate in the battle against Oryx's Hive fleet over Saturn.[3]

In Destiny 2, Ketches can be seen again, as the House of Dusk use them to fight against the Red Legion.[4]

The overall design of the Ketch falls in line with the organic nature of most of the architecture seen within Fallen culture, featuring sweeping lines and bulbous curves. However given the current status of the Fallen as a species, they are often dirty and held together with the scraps of metal their crews come across.

Despite their condition, they still serve as warships for the Fallen, with their power and resilience held in high regard. Pilot Servitors hardwired into the ship's mainframe aid their navigation.

The affiliation of a Ketch can be distinguished by the color of the line painted around its main engine. However, Ketches deployed during Public Events typically have a generic blue painted line instead. The Awoken repainted their captured Ketches with purple lines, twelve to fifteen of which were present during the Battle of Saturn. On Europa, the House of Salvation Ketches bear a grey hull with the House insignia emblazoned in blue on the underbelly.

Among the Eliksni is a saying, "Ketch is Kin, Kin are All", emphasizing the fact that a Ketch is a family home that fostered clans.[5] Indeed, the word for Ketch is synonymous with family.[6] A wrecked King Ketch once contained a ceremonial washing bowl, a child's musical instrument, and the cracked ceramic effigy of a Servitor.[5] Ketches are also given honorary titles by naming them after their Prime Servitors, such as Wintership Simiks-Fel and Wolfship Orbiks-Fel. To the Eliksni, Ketches and other Fallen spacecraft are far more than just means of traversing the stars, they are a family member that the Eliksni would defend to the bitter end. 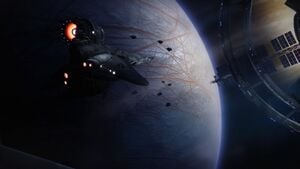 A Ketch near the Morning Star orbital station