"Vex encryption. Unbreakable? Ha, so they say."
This article does not have enough or has no inline citations. You can help Destinypedia by adding citations. For more information, see the Citation Policy.

"Skolas tried to unite the Fallen Houses but failed. Who would have thought that sheer desperation would succeed where he failed."
— Ghost[1]

The House of Dusk is a new Fallen House that has recently emerged following the advent of the Red War. They are engaged in conflicts with every other faction in the system.

Some time after the Reef's disastrous attack on the Dreadnaught, the surviving Prince Uldren Sov allowed himself to be captured by the House of Kings in order to gain an audience with their Kell, Craask. Craask reluctantly bent the knee to Uldren, and beseeched him to carry the message to every other Fallen House to abandon their old loyalties and join together for the sake of survival.[2][3]

Following the Devil Splicers' defeat at the peak of the SIVA Crisis, the Fallen collectively retreated from all of their known strongholds, leaving their banners behind as well.[4]

"Fallen comms, still trying to reach their brothers and sisters. Some of these headers are still marked with House sigils. House of Devils, House of Wolves..."
— Ghost 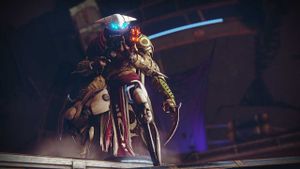 Nearly a year after the SIVA Crisis, around the time of the Red War, the House of Dusk suddenly emerged, with no sign of the other Fallen Houses being present outside of ruins. Currently, the House of Dusk is engaging in a massive guerrilla war with Red Legion forces across the Solar System, with other factions being targets as well.

One year after the Red War, the House of Dusk entered into a civil war with the Scorn, following their breakout from the Prison of Elders.

With the demise of the House of Wolves, former members can be seen working with the Dusk which include The Silent Fang, Queenbreakers, Pallas Seigebreakers and those afilliated with Beltrik and Irxis.

Despite having these new recruits, the House of Dusk continues to splinter and suffer, as agents of the Last City have observed that many of its members deserted to either join the Kell's Scourge, led by Siviks, Lost to None, or strike out on their own. Following Sivik's mounting failures and eventual death, the House of Dusk continues to fracture and radicalize, the result of a lack of leadership.

A year after the events of Forsaken, the house is now more fractured and divided than before. The return of the House of Devils, the emergence of the House of Light and Variks, The Loyals's House of Judgment have only further drained the ranks of what was once considered a unified Fallen House. Despite this, however, the Fallen have seemingly made one last haven for themselves on the Moon. Exploiting a crashed Ketch, they now hold a lot of the old territory that they once did. Even despite this, the legacy of the House of Dusk seems to be drenched in failure, at the start of the Red War, they were the largest House ever to threaten the System. But their constant defeats at the hands of the Guardians and with no Kell in the absence of an Elder Cipher, they have no legitimate leadership.

If there is one obstacle to this, it is that once the House of Dusk finally breaks, three new Houses will rise from its ashes. The return of the vicious House of Devils and the rise of an ally in the form of the House of light, along with the mystery of Variks the Loyal's rising House of Judgment will illustrate how the Eliksni as a species taking up sides.

Even though the house itself does not appear in present day, it is revealed that the House of Dusk adopted their purple banners from the House of Rain that attacked a settlement of Mercury when it was still a garden world.

Primarily distinguishable by their dark purple cloaks and new weapons, their eyes glow an intense turquoise, much brighter than the pale blue seen in Fallen from Destiny 1, and wear very little armour, instead choosing to rely on their natural exoskeletons for protection. What armor remains is heavily weathered and worn down.

The House can be found on Earth, Titan, Io, Nessus and Luna, warring with every other alien faction in the system. Within the House of Dusk, the Fallen no longer worship Servitors and machines as they used to, having devoted their energy towards simple survival. With their emergence, they are believed to be the most powerful active Fallen faction in the Solar System.

Evidence strongly imply that the House of Dusk is an amalgamation of the remnants of other Fallen Houses. Dusk structure bear a level of complexity similar to the House of Wolves. There are multiple specialized forces that are given their own set of tasks. Pike gangs are sent to patrol Fallen territory and harass intruders. Signal crews led by recon specialists and stealth troops hack into and jam communication devices used by enemy forces to prevent them from strategizing. Glimmer extraction crews use Glimmer Drills to acquire wealth and resources. All of these divisions are given their leaders from the ranks of their nobility. The whereabouts of their Kell and Barons is unknown. Therefore, its possible that while united for the sake of survival, they operate independently from each other.

The House of Dusk is actively calling other Fallen to join with it. Fallen banners displayed in Trostland bore a crude version of the House of Judgment's sigil, but the banners were seemingly used as warnings rather than to mark territory ownership. Some Fallen tech also found in the area once belonged to the House of Winter and had been transported from Venus. While a communications device in Siren's Watch was discovered to be using variants of encryption protocols derived from the House of Kings. A former noble of the House of Wolves was found to have joined the ranks of the House of Dusk. Lastly, the House produces Heavy Shanks based on the House of Devils' S.A.B.E.R.-2 prototype. Ghost notes that where Skolas failed in uniting the Houses, sheer desperation (due to the massive losses faced in the Taken War and SIVA Crisis) succeeded in burying old grudges.

Another unusual characteristic is that it utilizes Servitors from multiple lines (Brandaks, Drensik, Kendriks, Kiriks, Merix, Nariks, Selkis, Serkuleks, and Teleks), a practice previously only seen with the House of Wolves, which used two lines (Kaliks and Orbiks). Furthermore, it possesses multiple Prime Servitors where no Fallen House had been known to follow more than a single Prime Servitor at once, and which were almost never deployed offensively except where the Fallen believed that they had an overwhelming advantage or when their lair was invaded. The House of Dusk went against traditions by regularly sending Prime Ether Servitors to directly distribute ether to crews in combat zones on various worlds, and deploying other Primes like Brandaks Prime and Serkuleks, the Fount as reinforcements against Guardian incursions.

In addition to their scavenging, the House of Dusk also appears to be focusing on Ether production and experimentation. In the European Dead Zone, Raksil, Archon Priest and Serkuleks, the Fount were responsible for producing and distributing an enhanced variety of ether from Cabal technology that strengthened the Fallen. In the Arcadian Valley, Ghost scanned a tank with ether that had been diluted through unknown means, which he speculated meant that the Fallen on Nessus were experiencing a dire ether shortage. Equally intriguing is that many of the House of Dusk's Captains throughout the system are comparable to Kells in size, a level of growth which requires a large amount of ether to achieve.