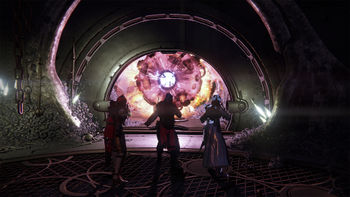 A team of Guardians in the Prison of Elders

The Prison of Elders is a prison facility in The Reef, under the oversight of Variks, the Loyal. It is based on the House of Judgment's traditions for settling disputes between Fallen through trial by combat. The Archon Priest Aksor was previously a prisoner before later being retrieved by Taniks and having his soul restored by the House of Winter on Venus. The Prison of Elders is also known to contain members of the House of Wolves that were captured during the Reef Wars, [1] though it also contains Hive, Vex and Cabal inmates who have attacked the Reef. These prisoners are considered "trophies" by the Reef, kept cryogenically frozen for the Queen's benefit. Though since Skolas' rebellion, the Queen now wants the prison cleared out, and has recruited the Guardians to do it.[2]

A year after the Red War, the undead Fallen horde known as the Scorn orchestrated an incredibly massive breakout from the prison, following a lack of order after Mara Sov's and Variks' disappearances. Uldren Sov was behind the escape, and executed Cayde-6 with his own weapon after he attempted to stop the breakout alongside the Guardian. The Prison of Elders is also the location of the Nightfall Strike Warden of Nothing.

The Prison is featured in the House of Wolves as part of the new Arena game mode. It is limited to 3 players.[3] Four missions are available each week at different Levels. The Level 28 mission includes matchmaking and is always random. The other three "challenge" missions are at Levels 32, 34, and 35, and require pre-made fireteams. The Level 32 and 34 missions rotate weekly; the Level 34 mission will be replaced with something new, while the Level 32 mission will feature the previous week's Level 34 mission. The Level 35 mission is always Skolas's Revenge.

A single session consists of 5 rounds of 3 waves each, except for Skolas's Revenge which features 6 rounds. The final round of a session is a boss battle. Players spawn in the Airlock, a small central room that connects to the Prison's four chambers, each home to one of the four enemy races. As introduced in Forsaken, each one connected to a different prison block that housed each different race. A-Block holds Fallen, B-Block holds Vex, C-Block holds Cabal, and D-Block holds Hive. Once a round begins, a modifier is activated and players are directed to one of the chambers. After completing a round, players must return to the Airlock to begin the next round.

After completing the boss round of a Prison of Elders challenge mission, a gate in the Airlock's floor opens and allows players to descend into a treasure room. The room contains three chests that can only be opened once per session: two small chests that may drop rare items, and one large chest that requires a Treasure Key to open and may drop Reef-themed gear as well as exotic items. Other items that can drop from the chests include Strange Coins and Motes of Light. Players with multiple Treasure Keys may repeat a Prison of Elders session to refresh the large chest so that the Keys can be used; the large chest can be opened multiple times per week, the only limit is the number of Treasure Keys in the player's possession. As of the April Update, Prison of Elders now has two extra game modes: Level 41, which has a chance of hosting Taken and Level 42, which is known as Challenge of the Elders.

Each round features a specific modifier that can force Guardians to adapt their strategy. The modifier is active for the entirety of the round. Skolas's Revenge features two modifiers per round. In addition to existing modifiers, House of Wolves introduces eight new ones:

During some waves, Variks will issue a time-sensitive Critical Objective that Guardians must complete during the battle. Failing to complete a Critical Objective will cause Variks to invoke Warden's Punishment, a debuff that immediately kills the Guardians and forces them to restart the round.

Occasionally, at the start of a wave Variks will send Guardians a helpful item.

Generic bosses are fought on Round 5 of the Level 28 Prison of Elders. They may also appear as a boss during Rounds 1-4 on one of the challenge modes. Generic bosses lack any special abilities that challenge mode bosses have. However, as of the April Update, these bosses will gain special abilities when encountered in the most difficult mode of Prison of Elders yet: Challenge of the Elders.

Challenge mode bosses are much more difficult to fight, as they all come with their own special abilities.

In addition to the above mission rewards, players can enter the treasure room in the Crystal Barrows. They can open the two smaller chests, which rewards lesser items such as strange coins and motes of light, but the big chest can only be opened with a treasure key, which can be used even on the Level 28 version. The chest can drop legendary Queen-themed equipment, legendary Fallen-themed equipment, and (once per character) a Level 36 Exotic weapon.

The Prison of Elders is a massive complex in total, with at least four main prison blocks and a minimum of fifty-four floors. A-Block houses Vex, B-Block is composed of Fallen, C-Block is entirely Cabal, and D-Block is for Hive. It is unknown if the Taken have their own block, as the Prison is known to have a significant collection of them. It could be that they are placed alongside their Hive allies, as Sylok, the Defiled is encountered within the Hive section.

The Combat Arena where the gamemode from Destiny 1 takes place is located in the upper levels of the prison, directly above the Queen's treasure room and the Warden's command center farther below. Seeing as it has access to enemies from every block, this is likely located near the center of the complex. A large section of the Prison is built in a large cylindrical spire, with prisoners held on the exterior walls and control stations suspended in the middle, connected by large catwalks. It is possible that there are actually two or more of these cylindrical areas, as the area shown in Last Call and the climax of the Warden of Nothing strike both take place in structures of similar design, though with different construction. The former has no roof and is open to the sky, and contained the Prison's security hub before Cayde-6 dislodged and destroyed it, while the latter has a closed roof and contains the Warden's command center. It is also possible that these two areas are actually stacked on top of each other, in which case the Prison would possess over a hundred decks.

The Prison holds its criminals in one of two different ways: traditional barred cells and cryogenic pods. Standard enemies seem to be relegated to the simpler cells while the more dangerous members are frozen and stored below. Some or all of these cryo-pods are fitted with propulsion mechanisms similar to an escape pod, though the means for this is unknown. It could be that this is a more effective way to transport these high-level targets across long distances without risking the safety of a traditional crew, such as how Skolas was sent to The Nine. Many of these pods rained down on the Tangled Shore during the Hunt for the Scorn. It is possible that other pods were sent farther and contributed to the foes scattered across the system that The Spider placed Wanted bounties on. For transportation withing the Prison, elevators, vacuum tubes, and train-like prison transports are the main means of getting from place to place. The transports are automated and have room for six prisoners in cryo-pods, three on either side. When the Warden took control of the prison, these transports ran amok, smashing at high speed into anyone foolish enough to get in the way of their tracks. It is likely these transports are only for high-level threats due to their small passenger size, as the vacuum tubes like those used to transport detainees up to the Combat Arena have a much higher capacity. Elevators are present for use by Prison staff and feature four crash seats spaced apart at medium intervals, as the immense height of the Prison would be deadly if the elevator were to fail. The main airlocks to the outside are located on Deck Zero, though there are also access points in lower decks used to covertly transport prisoners. Uldren Sov was delivered through one of these.

In case of a Prison riot, turrets were installed in the catwalks that could be controlled remotely from the Security Hub.