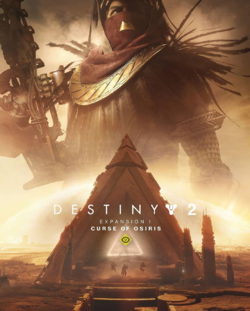 Curse of Osiris is the first DLC expansion for Destiny 2, and was released on December 5, 2017. Curse of Osiris takes place on Mercury and follows the Guardian's efforts to rescue Osiris from the Vex in order to avert a dark future.[1][2][3] The expansion's plot also focuses on the relationship between Osiris and his disciple, Ikora Rey.[1][4]

After the defeat of the Red Legion, the battered Last City starts to rebuild all they lost. However, when a terrible Vex plot threatens Mercury, the legendary warlock Osiris calls upon the Guardian to prevent the Vex from assimilating the entire universe.