(Redirected from The Consul)

"We have spent our lives, you and I, working to reshape our society... reforge our people... rebuild an empire nearly destroyed by Calus's greed and corruption."
— The Consul

The Consul was a disgraced aristocrat and the mentor of Dominus Ghaul. He was the secondary antagonist of Destiny 2.

"I will not dignify this leech with a name. Think of him as a roach, a roach who scurried out from the ruin of the old Praetorate. He'd grown fat on the scraps they fed him, the wealth and influence and favor. And when I took his scraps away to enrich my throne and inspire my people, he wanted them back."
— Emperor Calus

The Consul was a figure with close ties to the Cabal Praetorate. When the Praetorate was overthrown by Emperor Calus, the Consul lost all of his power and influence, and was personally castrated by Calus to ensure he would beget no heir. During the new Emperor's coronation, the Consul was stripped naked and brought before the assembled royal court at the edge of vast desert and ordered to run by Calus.[1] At some point, he stumbled upon Ghaul, a young orphan who had been left for dead. Hungry for revenge and realizing that Ghaul would be a useful tool, he raised, trained and instilled his hateful ideals into Ghaul, growing him into a ruthless warlord [2]. 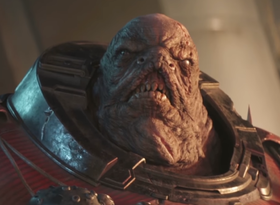 Thousands of years prior to the Red War, the Consul masterminded the coup to overthrow Calus. The Emperor's closest allies and advisors betrayed him and made Ghaul the new Dominus of the Empire. At the request of his daughter Caiatl, Calus was instead exiled to The Leviathan. With Dominus Ghaul now in charge of the Cabal, the Consul became his most trusted advisor and lifelong friend.[3]

"The City is secure. Those who fled, are being hunted, and those foolish enough to remain have been executed."
— The Consul

During the closing stages of the Cabal invasion of the Last City, aboard The Immortal, the Consul approached Dominus Ghaul as he was interrogating The Speaker, reporting that the Traveler was secure, and the remaining Guardian forces had been executed within The Last City. Unlike Ghaul, the Consul considered the Traveler simply a "great machine" with no intelligence of its own.

As the Red Legion sought to secure their hold on the Sol System, the Consul and Ghaul met with Bracus Zahn, a rogue arms dealer. The Consul was angered by the ex-soldier's attitude toward the Dominus, and warned him about being flippant towards the Red Legion's leader. However, Zahn warned the Consul to not waste the time of the only arms dealer the Legion had, drawing the further ire of the Consul and the other Legionaries present due to the necessity of Zahn's services causing them to be unable to harm the disrespectful renegade Bracus.[4]

Later, as Ghaul spoke with the Speaker about how the Traveler chose whom to empower with the Light, the Consul arrived to inform him that a mission on Io to learn how to extract the Traveler's Light was a success. He declared that with the Traveler's cage complete, Ghaul could act to claim the Light immediately. Ghaul demurred, however, having been persuaded by the Speaker that the Light could be gained through devotion and self-sacrifice.

After The Almighty was deactivated, the Consul brought news of the event to Dominus Ghaul, infuriated at him. The Consul, frustrated that Ghaul would heed the Speaker's advice over his own, berated Ghaul for not seizing the light sooner. Ghaul attempted to ignore him, still believing he could earn the Traveler's favor on his own merits, but the Consul had run out of patience, who then released the Speaker's restraints and crushed his fallen mask.[note 1] The Consul urged Ghaul to remember who he was, to remember that he had already been chosen for greatness, not by the Traveler, but by the Consul, and to seize the Light for the glory of the Cabal. While the message did get through, Ghaul was not willing to let the Consul's insubordination go unpunished. Ghaul, while promising to fulfill his destiny, strangled the Consul to death.

"You have already been chosen, not by some inert machine, but by me! I chose you... the day I found you."
— The Consul, contending with Ghaul's desire to be chosen by the Traveler

The Consul is a large Cabal sporting heavy but worn-down ancient armor, with red paint worn away in some places to reveal gunmetal backing, and a ragged black cape. His breastplate is draped with Ghost "eyes" and an ATS/8 Arachnid helmet. He does not wear a helmet, and his arms are completely exposed. Additionally, the Consul sports metal covers over his fingertips. In his youth, the Consul's armor was heavier and more imposing, with large spikes atop his shoulders.[5]

The Consul's body, skin, and face is heavily shriveled, signifying his age, and due to a scar over the left side of his face, his left eye is blind.

Personality-wise, the Consul is an aged but prideful Cabal noble who fully believes in Cabal dominance but is highly power-hungry and arrogant, viewing nearly everything around him to be a tool for the Cabal to exploit. He even saw that the Traveler was just an advanced machine and its light was to be harvested for their benefit. The Consul was also vengeful, as after Emperor Calus relieved him of his power and publicly shamed him, the Consul sought revenge against his emperor and restore his power. Organizing a coup with like-minded individuals who were also dissatisfied with Calus, the Consul was even willing to use an innocent orphan as his tool for vengeance. Instilling his hateful and warlike ideals into Ghaul, the Consul sought to use Ghaul as his weapon to restore his influence and power. However, he underestimated how well he trained Ghaul, as he proved far more strong-willed than he had anticipated, refusing to bend to the will of the Consul's group. In time, the Consul and his followers learned to fear and obey Ghaul, following his creeds. Despite the Consul's original intention to use Ghaul as a puppet, he nonetheless viewed the Consul as his closest friend and made him his chief advisor.

During the Red War, the Consul remained largely loyal to Ghaul but became frustrated with Ghaul's obsession in proving himself to the Traveler to gain its power and was growing increasingly furious that the Dominus would heed the advice of an imprisoned Speaker over his own. Ultimately, when The Almighty was permanently disabled, did the Consul confront the Dominus which in his arrogant insubordination of questioning Ghaul's objectives and reminding him of what he did for Ghaul, ironically convinced Ghaul to take the Light by force, it angered him enough to kill his old friend.