(Redirected from The Leviathan)
This article is about the personal ship of Emperor Calus. For other uses, see Leviathan.

The Leviathan is a massive Cabal space vessel that serves as the personal pleasure craft of the exiled Emperor Calus and his Loyalists.[1][2][3][4] It is the site of the aforementioned and Crown of Sorrow Raids, as well as the Eater of Worlds and Spire of Stars Raid Lairs. The former takes place exclusively within the palace atop the ship, whereas the latter take place deep within its interior and around the tower situated on the top of the ship, respectively.

The Leviathan is a gigantic spaceship, which is used by the Loyalists to eat planets and process them into a thick, purple "royal wine". When a desired object is targeted, Cabal soldiers are sent to gather data on its geology to find out how to grind it up. The resulting rubble would be refined and mixed with "royal nectar" to produce the royal wine for Calus' consumption. A large palace where Emperor Calus and his servants reside stands on the head of the ship, and two small artificial suns hover in place above the highest tower.

The Leviathan is formidably armed, carrying laser weapons, missile bombardments and fusion missiles powerful enough to destroy Cabal warships in a single direct hit. These weapons use an unusual, immersive targeting system that may involve psionics, there is even an energy that courses through the ship that can be utilized by certain items obtained.

The Leviathan was constructed at some point prior to or during Calus' reign as Emperor. According to Calus himself, the ship was modeled after "a mythical beast from the dreams of worms", Which was thought to be the Leviathan of Fundament. It turned out that the ship was based off of a "landwhale" native to the cabal homeworld. Its original function, whether a prison barge, warship or pleasure craft, is unclear.

"This Leviathan. This prison ship. I will remake it, as I have been remade. No longer will it represent a mythical beast from the dreams of worms. It will serve as an icon for my newfound gluttony."
— Emperor Calus

On the night of the coup that deposed him, Emperor Calus was arrested and quietly ushered aboard the Leviathan, where Dominus Ghaul and his co-conspirators intended him to remain in exile in perpetuity. The Leviathan's navigation system was locked onto a course that would take it far from the Cabal Empire's domain. After many centuries, the system failed and the ship progressed no further; it had come upon a great expanse of nothingness, and could not plot a course through a place that did not exist. It was here that Calus claimed to have encountered something that overawed him, potentially the Darkness itself, and resolved to become its herald. With the navigation system unlocked, Calus charted a course back to Cabal territory, collecting Shadows from various alien races along the way to enact his revenge against his usurpers.

"The Cabal seat of power now resides in orbit 'round Nessus. In a giant fish."
— The Drifter

Following Dominus Ghaul's death during the Red War, the Leviathan arrived in the Solar System and began consuming the planetoid Nessus.

Some time after the Leviathan began consuming Nessus, it sucked up a powerful Vex mind: Argos, Planetary Core, which projected a shield to protect itself, while simultaneously clogging the Leviathan. The Vex mind was only removed through the intervention of a Guardian fireteam. After the death of Xol, Will of the Thousands, the Red Legion, led by Val Ca'uor, attempted to take control of the Leviathan and kill Emperor Calus, only to be stopped by another fireteam of Guardians.

The Reef armada regularly performs fleet maneuvers near the Leviathan to intimidate Calus that any action he takes can be met with equivalent force. Though target locks are established, no fire is exchanged on either side.

Wanting a Shadow to command the Hive, Calus breeds Gahlran to wear a Hive artifact known as the Crown of Sorrow. However, Gahlran is driven mad by the Crown's power, as it was a trap laid by Savathûn, the Witch-Queen. Under the control of Savathûn, Gahlran summons a massive Hive infestation, killing many Loyalists, and taking control of the depths of the Leviathan's Menagerie. Now wanting his former Shadow put down, Calus calls upon the Guardian and their allies once more, offering more riches and rewards upon their success.

After a grueling struggle against the mad Shadow and the Hive's magic, the Guardians succeeded in killing Gahlran and retrieving the crown. With the artifact back in Calus' possession, he orders his Psions to continue studying the runes found underneath it to find a way to prevent anyone else who would wear it from falling to its madness, and to also leave its ability to control the Hive intact.

Calus later honors the Guardians with a Tribute Hall established aboard his ship, and offers them to become his Shadows of Earth.

Sometime after the arrival of the Pyramids in the Sol System, the Leviathan mysteriously vanished from the orbit of Nessus. Osiris looked into its disappearance, but found nothing hinting as to why the Leviathan left or where it was headed. Logs found aboard the Glykon Volatus suggested that the Leviathan was simply hidden at some location in the System while Calus performed his experiments. In reality, after returning from the Glykon, Calus drove his Leviathan into the anomaly of Mercury, as the Voice suggested through the Crown of Sorrow. Though he feared it would be torn like the Glykon, the Leviathan resisted, and though it came out mutated, it was still well capable of space travel.[5]

"The Leviathan is growing, changing, transforming. You are witnessing the death of one state of being... and the beginning of another."
— Emperor Calus 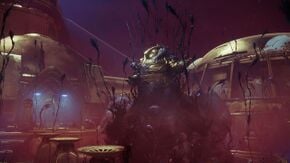 The Leviathan infested with Egregore.

Two years after its disappearance, the Leviathan returned to the Sol System in orbit of Luna, having become derelict, dilapidated and heavily overgrown with Darkness-enhanced flora similar to the Glykon Volatus; the latter where Calus sacrificed countless Scorn to feed the extradimensional fungi. Calus had also forged a psychic connection from his ship to the Lunar Pyramid beneath the Moon, turning the Leviathan into an extension of the dormant structure's influence and rousing the Nightmares to haunt his derelict vessel. Undead hordes of Scorn that Calus previously experimented upon would also infest the Leviathan and ally with the Loyalist Cabal. The Leviathan also changed in some yet unknown ways, as some hull parts can be found inside the ship, and Calus seems to say that now it is somehow alive. This was confirmed later by Calus when he admitted the Leviathan was once his prison, but he was now one body with the ship, able to feel the beings within the ship "wriggling through my innards".

Though the Guardians worked with Caiatl in severing the connections Calus was forging with the Lunar Pyramid, conquering the personal nightmares of Crow, Zavala and Caiatl herself, the former emperor nonetheless succeeded in his intent of entering the Pyramid and become a Disciple of the Witness. The Guardian and Caiatl, however, were able to prevent Calus from assuming control over the Lunar Pyramid and merging with its power, pushing the former emperor back. Nonetheless, Calus had given himself over to the Witness, thereby becoming the herald of the Second Collapse. Since then, the signal the Leviathan was giving would go silent and Eris would speculate that it would take months to clear out the Nightmares that continue to haunt the massive vessel.

Unlike previous raid locations, areas within the Leviathan are not given unique names as they load in. However, as with locations within a Crucible map, certain rooms and areas have a unique name that is displayed beneath the player radar. However, this was changed in Season of the Haunted upon the return of the Leviathan where the regions of the Leviathan do appear as loading zones.

The Derelict Leviathan Patrol space was added as part of Season of the Haunted. It was slightly different than other spaces.

The only area where a public event occurs is the Castellum, the main landing zone, which features the Nightmare Containment activity. In the other two locations, the Royal Pools and the Pleasure Gardens, no Public Events occur. Instead, there are a number of Ultra Nightmares constanly spawning as a sort of World Event. There is a chance that one of these Nightmare spawns be changed with a different World Event, such as a High Value Target. Some of these World Events are also announced by the lighting turning dark for a couple of seconds, with a sound playing, like a Public Event is signaled in other locations. Finally, a Haunted Alcove can also become active, which is a hidden location in the area that features a powerful Nightmare.