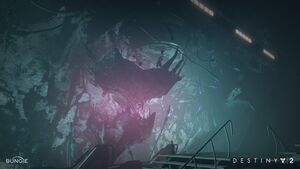 Egregore is a strange fungus-like life form that is commonly associated with the Darkness. It has been encountered in various locations like the Derelict, the Cabal Carrier Glykon Volatus and the Leviathan.

Egregore resembles Earth fungi in many respects, but while Earth fungi feed on dead or decomposing matter, egregore is drawn to the unique psychological phenomena associated with the deaths of sentient beings. The fungus is capable of infecting sentient beings through the use of skull-penetrating tendrils, which enable the egregore to suspend the victim's mind in a state of near-brain death, allowing it to feed on the drawn-out death process of the victim.

Egregore spores are linked to a mycelial network that connects them across the void of space and even alternate dimensions. These spores can apparently "open one's mind" to the Darkness, and permit affected individuals to pass through energy barriers generated by the fungus.

Egregore appears to use the Crown of Sorrow as a passageway to infest spaces. Usage of the Crown upon the H.E.L.M has caused egregore to infect and spread throughout and past the quarantine zone the Crown is placed within. This is similar to how the Crown sprang spores of egregore upon the Glykon, after it had been used to commit multiple communions with the anomaly[1]. It is currently unknown how Drifter came to be in possession of his ownership of egregore, though he claims it was on a icy planet with no name and no importance[2].

Egregore appears to form a network of connections between Darkness-related entities, such as the Pyramids and the Ziggurat, and connects them to a central point that communicates with those like Rhulk and Calus, which appears to be the Witness[3]. Eris Morn and the Drifter discover this through experimentation by burning egregore stalks near Pyramid technology, which opens up visions of the network that egregore forms between entities across space.

Calus' own current possession of egregore appears to stem from his visitation of a planet "far off" from Earth, where it grows in great forests across its surface[4]. He claims the Leviathan infestation is still connected to that same planet's own forestry. Crow speculates Eris may find this information interesting, but is nervous at the idea of intelligent fungus able to communicate across the void of space.