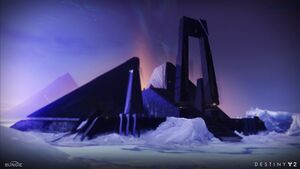 The Ziggurat, with the Pyramid seen on background.[1]

The Ziggurat is a structure on Europa affiliated with the Black Fleet. It was projected by the Europan Pyramid, and self-assembled into a stepped pyramidal structure embedded near the campsite in the Beyond area of Europa. Atop the central platform of the Ziggurat are 4 Stasis Locks with different symbols, which are unlocked by The Guardian through the Splinter of Darkness to gain some understanding of Stasis and eventually wield it against the Barons of House Salvation. The Guardian interacts with the Ziggurat for the first time after acquiring the Splinter of Darkness from the Exo Stranger and return to it after acquiring the other Splinters of Darkness from Phylaks, Praksis, and Eramis respectively. Upon the retrieval of the final Splinter from Eramis, the Ziggurat acts as locus for allowing the Guardian entry to the Europan Pyramid, where they commune with the statue to gain the ability to wield Stasis outside of Europa and unlock Stasis aspects through its mastery by assisting the Exo Stranger on her quest to decrypt her grandfather Clovis Bray I's journal. She finally reveals her identity as Elsie Bray before beginning the quest.

According to the AI of Clovis Bray I, the Ziggurat (or a similar structure) has been present in the system since the Golden Age, as he used his former staff to create a simulation trial based on a much larger iteration of the Ziggurat.

Much later, as the Guardian deals with the Nightmare threat aboard the derelict Leviathan, Eris Morn travels with The Drifter to investigate the hidden nature of Egregore only to discover that Elsie Bray is gone and her companion takes her stead. Eris uses the Ziggurat to examine the properties of the Egregore sample recovered from The Derelict earlier. She concludes that the Egregore is connected to 4 different signal points, 2 of which are stronger and the other 2 are weaker. They depart for Savathûn's Throne World and concludes that The Lunar Pyramid and the neighboring Europan Pyramid are the stronger points in the Egregore network while the Glykon and the Leviathan are the weaker points.