(Redirected from The Derelict) 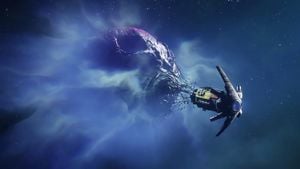 The Derelict is the Drifter's jumpship and mobile base of operations. Guardians who wish to play Gambit may assemble on the Derelict before being transmatted to the playing field below.

The Derelict tows a massive globular object behind it, far larger than the ship itself. The Drifter claims he found it in a place "cold enough to snuff out your Light," suggesting he brought it back from his outsystem expedition to a frozen world with Light-draining creatures[1]. However, it was revealed in Season of the Drifter that it was a "gift" to the Drifter from the Nine.

The Drifter's ship appears to be holding many unspoken secrets, such as it hosting egregore for many years before it ever became a focus of investigation for the Vanguard. When pressed by Eris Morn as to why he had never mentioned his ownership of the fungus, the Drifter simply replies "Ain't nobody ever asked."[2]. This egregore collection is visible within the landing pad area, sealed behind glass windows. Eris muses "What wonders you must have buried in this heap", but turns down the Drifter's offer of a tour as they have investigate work to do[2].