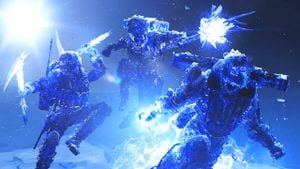 Stasis is an elemental manifestation of the Darkness, in an equivalent manner as Arc, Solar and Void are elemental manifestations of the Light. It is related to cold, and more precisely to the cessation of movement on a macroscopic and atomic level. It is first introduced in the expansion Beyond Light as the first of Darkness-based subclasses.

Stasis was first encountered by Clovis Bray I when he was called to Europa after communing with the Anomaly. Clovis found he was unable to wield it himself and instead made extensive notes upon it as well as Clarity Control in his journal.

According to Shaw Han, the Darkness used Stasis in The Collapse to kill many humans. This is the reason he is fervently against Guardians wielding it as a weapon.

After the second arrival of the Pyramids in the Sol System, Eramis, the Shipstealer obtained the ability to wield Stasis through the use of a Splinter of Darkness. With the help of Praksis, the Technocrat she was able to extend the use of Stasis to several other members of the House of Salvation. The Fallen house would go on to experiment with Stasis themselves, culminating in the creation of Salvation's Grip which was later located by the Drifter and stolen by the Guardian.

After arriving on Europa, the Exo Stranger would teach the Drifter and Eris Morn how to wield Stasis. Later, the Guardian would also be granted the power of Stasis, first through using a stolen Splinter and later by calling upon the Darkness within themselves. The Exo Stranger would go on to help them further understand Stasis using Clovis' journals and encouraged them to introduce the power to other Guardians. However, the Vanguard leadership, primarily Zavala, holds ill-feelings about Guardians wielding powers that came from that which brought about the Collapse. Though Zavala understood the reasoning of wielding Stasis against Eramis and her forces as "fighting fire with fire", he concluded that Guardians cannot compromise with the Darkness, thereby making it a policy to ban Guardians from using Stasis. Despite this policy proclamation, Guardians continue to learn and wield the power of Stasis in their efforts to save the Solar System from suffering another Collapse.

With Xivu Arath's forces hunting her sister down, some of the Humanity's enemies linked directly to the Darkness, namely Taken and Scorn, have been seen utilizing Stasis as well, with some powerful Taken using Boomers that leave behind slowing fields on impact, and Scorn Ravagers wielding Stasis Censers instead of their typical Solar Censer.

Behemoth Titans can use Stasis to summon a Stasis gauntlet that can be slammed into the ground to create a large area of freezing Stasis crystals known as Glacial Quake.

Revenant Hunters use Stasis to summon two Stasis kamas thrown in quick succession, known as Silence and Squall. Silence creates a small area of freezing, and Squall creates a roaming Stasis storm that slows and damages enemies caught inside.

Shadebinder Warlocks can manifest a staff out of Stasis to send out barrages of freezing Stasis shards amd create shockwaves that shatter all frozen targets. This Super is known as Winter's Wrath.

Common effects of Stasis subclasses are:

Stasis grenades are accessible to all classes.

Shared effects that can be exchanged to customize the powers of a subclass. Stasis Fragments are initially obtained from the Exo Stranger on Europa.

Stasis damage is rare among enemies. Powerful Fallen of the House of Salvation can use Stasis abilities in the form of Duskfield Grenades, Stasis crystal storms, or with their Ultra Smash. The only ranged Stasis weapon is the Stasis Boomer wielded by some Taken, while the only melee weapon is the Stasis Censer used by Scorn Ravagers. That said, these abilities have additional effects beyond their elemental damage, being capable of slowing and freezing the player.