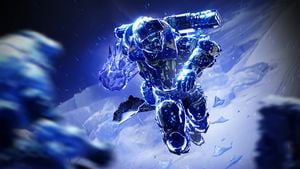 The Behemoth is a Stasis-based Titan subclass featured in the Beyond Light expansion in Destiny 2. It is extremely effective at close range for damage output and impromptu cover.

The ground ruptured and sizzled as Scorch Cannons and Wire Rifles pummeled my cover from all directions. Fallen war cries echoed through their endless ranks; despair grew within me, but with it came a whisper. An offer. I closed my eyes and accepted.

The cold embraced me, dimming the sounds of battle into reverberant echoes, thin and distant. I flexed my gauntlets and felt the roar of glaciers grinding against the bones of the world.

I crashed my fists into the earth and frozen obelisks erupted, encasing Dregs and Vandals into helpless effigies. I gazed through the crystals enveloping my enemies, and in the myriad refractions, I saw their fear. I felt their desperate will to escape my grip, and in the moment before release, I shattered it.