"Spread your wings and set the sky ablaze"
— Dawnblade Description 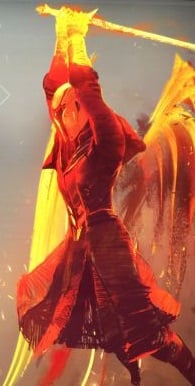 The Dawnblade is a Solar-based Warlock subclass that is available in Destiny 2. It grants the Warlock flight abilities in order to stay in the air longer, and access to a flaming sword that projects blasts of Solar energy for the Super.[1]

The sword acts like a grenade when slashed and the player character can hover or walk when the Super is active. A total of eight swords can be thrown.[2] The Attunement of Flame (aka bottom tree) subclass has the perk Everlasting Fire, which refunds super energy on kills, allowing more than eight swords to be thrown.

A young—by Warlock standards—apprentice holds out a hand and reaches for flame. Nothing. The wizened teacher laughs. "You're supposed to be teaching me. Not laughing."


The teacher's arm extends as one word hangs in the air, "Sword." As quickly as it appeared, the blade vanishes. "That doesn't help."


"Sword." In a flash, the blade appears again, this time at the student's throat. Both pairs of eyes widened. One aghast, one aglow. "Say it with me."


A blade appears in each outstretched hand. A pair of wings form on each Warlock's back. Two Warlocks take flight and vow to never again look down.

"Spread your wings and set the sky ablaze."
— Class Description