"A Sunbreaker does not answer to any but the will of the Light. [...] Wield no power but the fury of fire!"
— Ouros 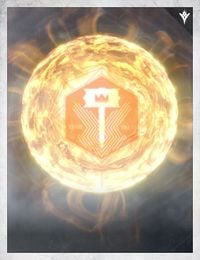 The Sigil of the Sunbreaker

Sunbreaker is a Solar-based Titan subclass featured in Destiny and Destiny 2.

The Hammer fell upon the horde in such numbers as to blind the eye and burn the soul. Our phalanx broke their front lines and incinerated the Thrall that reinforced their flank. I looked around the battlefield with pride upon the scores of once-disparate Guardians united to expel the Hive from our backyard. The Honor of Cormorant would win this day because of differences set aside and alliances hard-struck.

Alas, we both know how that day truly ended. Our early fortunes would be our doom. Green fire and failure would be your sole remembrance of that day.

But I remember different. I saw an alliance forged in the heat of the Sunbreakers' luminescence despite your opposition. That is what I remember.

If our flame should one day flicker and die, let it be to set your history ablaze.

Code of the Siegebreaker

Code of the Devastator