"In a world without Kells, Dreg strength will breed nothing but chaos."
— House of Rain proverb

A Kell is the political leader of a Fallen house and the commander of their House's Ketch.

"Without their Kell, Houses usually turn against each other."
— Ghost

Kells, or Kel in Eliksni culture, act as the political leader of their Fallen House, ruling their people and command their forces with an iron fist and usually commandeer their House's flagship Ketch.[1] Kells are also known for controling their Houses' Ether supply through the use of an Elder Cipher.[2]

They are mysterious figures rarely seen by lower ranks of the House and often viewed as mad, however the Kells travel a delicate path toward understanding and in the Old ways of the Eliksni, sought guidance from the Elders of House Judgement on codes of dignity and law.[3][4][5][6]

Only the strongest Fallen warrior leads the pack.[7] Kells maintain order among the House, whose subjects can often be aggressive. Their first command is a word and if unheeded, then the Kell's second command is the blade, resulting in docking.[8] Shamed Eliksni may later redeem themselves through brutal ceremonial combats such as the Archon's Forge or other means to prove their might.[9][10] Since the Eliksni culture has a love for Honor, the weak are Honor-bond into subservience and respect their Kell's authority like that of a sniper.[11]

Kells also have access to better resources and eat better, sleep safer, and live longer. A strong Kell's power is described to be like the wind: swift, howling and everywhere at once, comparable to the Guardians. Kells are more stronger, faster, and intelligent, than the common Eliksni.[12][13] If a Kell dies, the House collapses into a civil war between their nobility vying for dominance and kellship. Only the most powerful contender or when all opposition is gone can a new claimant assume control.[14] When the Wolf Kell, Virixas, was killed by Mara Sov, three Barons fought against each other to become the new Kell of Wolves.[15]

However it is possible that a House can still function without a Kell, as an Archon, Prime Servitor, or another Kell from a different House can assume command of the House.[16][17][18] Their loss severely weakens a House and demoralizes its forces, so for this reason, Kells are a prime target for enemy forces.

After the fall of most of the Houses in the chaos that engulfed the Sol System following the Taken War, few Fallen remained who could claim the title of Kell. Following the demise of Eramis, Kell of Darkness, only the House of Light, led by Mithrax, Kell of Light, was known to have a Kell at its head.

"The Great Machine will marvel, moved by might, and come to crown him Kell of Kells."
— House of Rain proverb

According to a prophecy by the House of Rain, the Great Machine would crown a mighty warrior as the Kell of Kells, and rule over all houses. At first no one attempted to claim the title for themselves, but few claimants would later rise.[19] 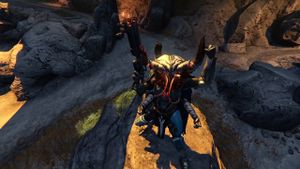 Skolas, the first to claim the title.

Skolas was the first prominent Fallen to proclaim themselves "Kell of Kells" following his release from Xur. While it is easy to mistake Skolas for being egotistical, it was however a rally call to his people as he says "I am the first, Kell of Kells, and I am the last, the Dreg of Dregs". His proclamation as the "Dreg of Dregs" is spoken with the promise that Fallen will regrow what is lost to them. Skolas became a key figurehead who understood how it felt to be conquered and started a movement where those who followed him were also named "Skolas" and fought for a common cause.

Following the death of Skolas, Variks would agree with him that only the Kell of Kells was capable of ending the brutal Fallen bloodshed. He then searched for a Kell of Kells candidate through the use of the Crow surveillance network gifted to him by Petra. At one point, Petra jokes to Variks that perhaps he is the Kell of Kells. Years later when the Scorned Barons are imprisoned, Uldren questions the loyalty of Variks to Mara Sov. Instead Variks found himself thinking about the old House of Rain proverb of the Kell of Kells. After much thought, Variks decided that he would become the Kell of House Judgment, in the hope of unifying his race and also stylise himself as a new "Kell of Kells". Variks would later regret his decision in releasing all the Prison of Elders and state that the promise of Kell of Kells clouded his judgement.

After the prison break, Variks found an ally in Eramis and was present in the formation of House of Salvation. This alliance soured after Variks discovered their dark ambitions to destroy the Traveler and sent a distress call to the Guardians. He informed them that it was the Shipstealer who attacked him and proclaimed her as a new "Kell of Kells" and unifier of the Houses. Eramis would live up to this claim and built a new military empire comprised of Fallen from the Houses of Devils, Wolves, Dusk and the Kell's Scourge.

Nearing the end of the Endless Night, Mithrax, Kell of Light and Saint-14 would defend the Eliksni Quarter from a Vex invasion brought on accidentally by Lakshmi-2 in a failed attempt to banish the House of Light. During this fight, Mithrax promised Saint-14 that if they fell there the Eliksni would tell the tale of the Saint fighting along side them, not against them. To which Saint-14 replies that Mithrax was the Kell of Kells, saying that they together were enough to save the House of Light.[20]