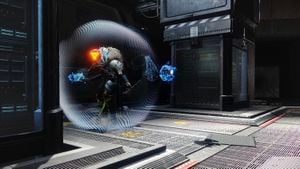 Siviks, Lost to None shielded by drones

"The enemy defiles the Black Armory by stealing our drones. Do not allow our wares to remain in their dirty hands."
— Ada-1[1]

Shield Drones were miniature drone units used by the Black Armory to protect its caches; which were then stolen and repurposed by the Cabal, Vex and Fallen to provide immunity shielding. They were prominently used by Forge Wardens and Forge Saboteurs in the Season of the Forge and required the player to shoot the drones before dealing damage to the enemy.