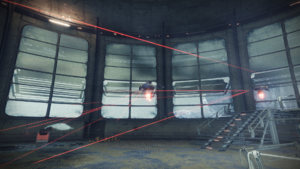 Fallen Drones are small drones employed by the Fallen for maintenance and analysis fields.

These drones can be seen first introduced in Destiny, hovering around a Glimmer Drills during Extraction and Defeat the Fallen Walker Public Events. However they were unable to take damage. They would later become more frequent in Rise of Iron, in which they would scan for parts from building and take it apart for the Devil Splicers to use. They would be prone to damage, allowing players to destroy them, however they were never significant in combat.

They later reappear in Destiny 2 for the Fallen in Glimmer Drills once more with no other uses. However that would change under the House of Salvation as they would be seen in the Crux Convergence Public Event on Europa, scanning a Crux of Darkness as the Guardians fight the Fallen. In order to trigger the Heroic version of the event, players will have to shoot off all of the drones from all of the Cruxes. These drones are not very resilient, but they can still take a few hits from a Primary weapon, and will disappear if all of them are not quickly destroyed.

Groups of four of these drones can also be found around many locations of Europa. At first glance, they just hover around, teleporting away when one of them is shot. However, if the player acquires a Scanner Augment from a Techno Squad Leader, one of the drones will be highlighted in yellow. This drone can be shot without making the others escape immediately, and then another one of the group will be highlighted. Destroying a group of four drones allows the player to activate a nearby augment terminal, and destroying three groups in the same general area completes a Triumph.