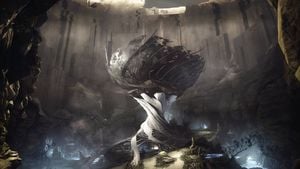 The tree of silver wings in the Cradle.

"In the Garden grows a tree of silver wings. The leaves are ruin, the bark disaster. Of the seeds we do not speak."
— Ruin Wings' flavor text

The Tree of Silver Wings is a mysterious entity referred to by multiple sources, typically in association with either the Black Garden or the metaphorical "garden" allegorically used to describe the state of reality predating the universe.

"The day was longer than all of time, and the night was swifter than a glint of light on a falling sugar crystal. [...] A tree of silver wings bloomed yielded fruit shed feathers bloomed again."
— Unveiling: Gardener and Winnower[1]

The tree once existed alongside the Gardener and Winnower. It was described as "ruinous", "disastrous", the air around it inspiring violence in those who would breathe even a little in[2]. It was later brought down by the two entities fighting with each other, and left to smoke amid the meadows[1].

Another "tree of silver wings" was discovered by the Guardian and Eris Morn in the heart of the Cradle on Io. It was stated by Eris that the Traveler created it when it arrived on Io but the connection between this tree and the original is unclear; however, the flavor text for the Seed of Silver Wings recovered from the tree strongly implies that both share a similar nature. Moreover, Ruinous Effigy, a trace rifle created from a branch of the tree, shares the motif of ruin and disaster described by Ruin Wings' flavor text and Mk. 44 Stand Asides's loretab.