Season of the Worthy

Season of the Worthy is the tenth season of Destiny 2 and the third seasonal content of Shadowkeep, starting from March 10th, 2020 and ending June 9th, 2020. The season focuses on the Guardians working with Commander Zavala and Ana Bray to rearm the Warmind Rasputin and prevent the derelict Almighty from crashing into the Last City. It also features the return of the Trials of Osiris activity, featuring Saint-14 as its vendor.[1]

Story & Activites: Save The Last City

"With the Sundial freed from the clutches of the Red Legion, one escaped Psion Flayer enacts a desperate ploy for revenge against the Last City. Guardians of the Light must set aside old differences to band together with unlikely allies and save the City from total destruction."

"Time Is Running Out
Race against time to save the Last City from destruction."

"Bounties & Bunkers
Rise to Rasputin's Challenge and clear bunkers throughout the system to reestablish communication with the Warmind."

"The Cult of Osiris seeks Guardians with flawless execution and incomparable teamwork. Is the challenge of a perfect victory too daunting or does your fireteam have the edge to reign? Exclusive rewards await those who never lose."

"Here to Stay
The pinnacle of PvP is back and it's here to stay. Fight for victory every weekend in this Power-enabled 3v3 Crucible playlist."

"Free to Play
All Guardians at Power level 960 or greater can compete."

"Tommy the Ghost presents us with a token of goodwill. Sure, it might just be a match, but all a Guardian needs to light up the darkness is a spark."

"Increase your Power and unlock powerful Seasonal mods each time you upgrade this sacred blade. Only you decide how much Power is enough."

"Gear, XP, rewards! Get the Season Pass and instantly unlock the new Seventh Seraph armor sets and the new Exotic Auto Rifle, Tommy's Matchbook. You also get an XP boost that speeds up your Seasonal ranks and Exotic engram unlocks."[2] 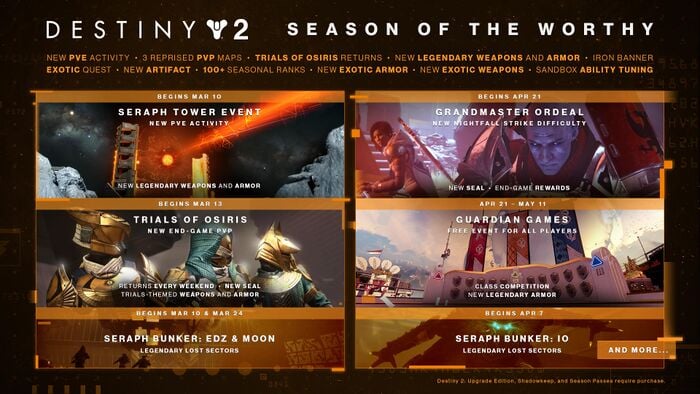