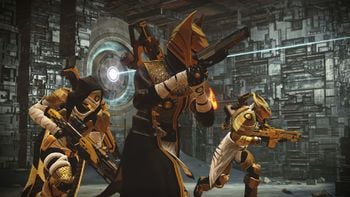 "Only the worthy may face the Trials of Osiris, for only the worthy are strong enough to endure what is to come. A string of victories will earn great rewards - but lose too many matches and you're out."
— Event description

The Trials of Osiris are a Crucible event presided over by the Disciples of Osiris in Destiny 1, and Saint-14 in Destiny 2. It is an endgame Crucible event first introduced by the House of Wolves expansion.[1] It is available every weekend, from Friday to the weekly reset on Tuesday. It returned to Destiny 2 during Season of the Worthy.[2]

The Trials of Osiris were formed under the guise of a competition, an enhanced form of Crucible with exclusive rewards for partaking Guardians[3]. The reason for this is that Brother Vance had discovered that when a Guardian suffers death, the spires of Mercury let out a mysterious twin tone that can only be heard by him. After much thanatonautic experimentation, in which Guardians suffered repeated deaths, the Disciples of Osiris decided to arrange a method for Vance to investigate these tones further. Using the funds obtained through Guardian sign-ups, the Disciples could fund their research, and obtain almost limitless research material as Guardians are known to be willing to do anything to obtain rewards, including kill each other.

One particular match gave Brother Vance a revelation. A Guardian's Ghost was in danger of being destroyed by another Guardian, who was acting blood-crazed and lost in battle frenzy. The Ghost in danger let off a flash of Light, blinding the attacker, with the Guardian paired with the Ghost summoning a Golden Gun and taking out the threat in one clean shot[4]. From this, Vance felt a different tone, one which was deeper and darker than before. Vance attempted to bring the information he had obtained from his experiments to Mara Sov, but she appeared to already know about the implications of these tones, and how they change according to circumstance of production[5].

As of the onset of the Red War, Vance makes a further discovery, that Final Death changes the tone even further to a D# minor[6]. A Guardian is eliminated just as the Traveler's Cage is applied, ceasing their connection with the Light, and their Ghost is destroyed by a Pulse Grenade. This tone is usually associated with doom, despair and sadness. Vance then concludes he knows enough from his research to reach a conclusion, and ends the Trials of Osiris. He then presents his findings to Osiris, his idol, and is sharply reprimanded for meddling with forces he cannot understand[7].

As of Season of the Worthy, Saint-14 takes over and endeavors to restart the Trials of Osiris, using it as a method to inspire and train Guardians for any future conflict, similar in scope to the purpose of the Crucible and Iron Banner. He appears not to know the darker origins of the Trials of Osiris, and innocently continues the event as a tournament of champions. Despite the disappearance of Mercury, he arranges a simulation of a Lighthouse to be used for giving out prizes, continuing to keep the tournament as Osirian-themed as possible.

To enter the Trials of Osiris, players must acquire a Trials Passage by completing the House of Wolves Story. The Trials Passage acts as the player's scorecard and only one can be carried at a time. Additional passages can be purchased from Brother Vance at the Vestian Outpost. In addition, he offers score-altering consumables (Boon of Osiris, Favor of Osiris, and Mercy of Osiris) and tier-based rewards packages. Tiers are based on how many wins are earned on a single passage. To purchase the consumables, players need passage coins from the Daily Crucible Event or random crucible matches.

In Destiny 2, Trials Passages are instead acquired from Saint-14 in the Tower hangar once the player reaches certain lifetime Valor and Crucible kill targets. Score-altering consumables are replaced with a variety of Trials Passages to choose from with bonuses built in. Saint-14 also offers bounties and the ability to focus earned engrams to items that have been received in the past. As of Season of the Lost, players must also own the latest expansion and the event will not be available during the first week of a season, nor prior to a Raid's World First completion or during the same week as Iron Banner.[8]

The Trials of Osiris use a variant of the game type called Elimination, with two teams of three players competing against each other. A win is when one team successfully kills all three players on the other. Matches consist of a number of 2-minute rounds; a team wins the round by completely wiping the other team, or capturing a zone that appears in the middle of the map. Winning a round gains a team 1 point toward victory, and the first team to 5 points wins the match. Players can be revived by teammates at the site of their death (Sunsingers can also revive themselves). The first team to eliminate the other completely wins the round. If the match goes into overtime, the first team to secure a capture point that appears in the middle of the map wins the match. Failing that, whoever is closest to the capture point wins. Heavy ammo only drops after one team has won 3 rounds, and heavy ammo does not carry into the next round. Supers, grenades melee charges and special ammo do carry over, however.

Further differences between the Trials and standard Skirmish include: the Trials take place on only one map each week; player level advantages are enabled as in the Iron Banner; fireteam matchmaking is disabled, requiring players to manually assemble a full fireteam of three. Lastly, players can play for a maximum of nine wins or three losses on a single passage, whichever comes first. Quitting or getting booted from the match also counts as a loss. Because this game mode tends to be extremely competitive, some players even resort to dirty tactics such as DDoSing, doxxing, lag-switching, and message spamming. Some teams tend to "cheese" the system by leaving a match immediately after they win, giving the servers an impression that they haven't won as much as they have, and therefore are less likely to get matched up against skilled players. While this tactic is not illegal, may players don't like when people do it since they have a higher chance of getting worse opponents.

Players who are lucky or skilled enough to obtain a Flawless Scorecard, which has seven wins and zero losses, are able to visit The Lighthouse on Mercury. Rewards include Trials-themed gear and an exclusive, limited-time emblem that changes from time to time. At the launch of House of Wolves, the emblem was the exotic-tier "Eye of Osiris" (currently the only exotic emblem in the game); The Taken King featured "Hic Jacet"; and the April Update introduced "Bastet's Dream". Once an emblem has been rotated out, it can no longer be obtained.

The return of Trials of Osiris in Destiny 2 was mostly unchanged gameplay-wise from its previous iteration, prior to an overhaul during Season of the Lost. Players were still obligated to assemble a fireteam manually, though the number of wins playable on a passage was reduced to seven, with the bar for obtaining a Flawless passage reduced accordingly. Adept weapons were introduced during Season of the Hunt, which can be additionally customized with stat-changing mods as an additional reward for going Flawless. The Season of the Lost overhaul came with the goal of making the event more attractive to players of lower skill levels. Passages now additionally track up to 20 round wins. Players will now gain reputation on completing a match, boosted by the number of rounds and matches won on their current ticket, which goes towards earning a Trials engram at Saint-14. It is still possible to go Flawless, and doing so remains the only way to obtain Adept weapons, and be rewarded with Trials Mementos for weapon crafting. Matchmaking has also been enabled, round times have been reduced to 90 seconds, and special and heavy ammo are now reset at the beginning of each round, alongside a number of other changes to fix exploits and reduce cheating. Labs modes for experimental changes to the Trials, such as making fireteams entirely of solo players in in the form of Freelance Trials, are occasionally introduced during select weekends.[8]