This article is no longer up to date and needs to be updated with new information. You can help by updating this article. 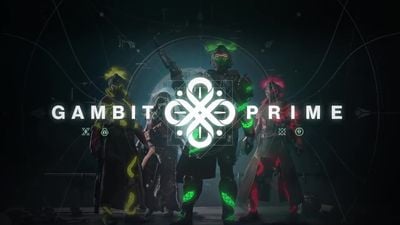 Gambit Prime is an evolved form of Gambit, hosted by The Drifter.

The playstyle of Gambit Prime is almost completely the same as its predecessor. Players kill enemies to gather Motes of Darkness, fill the bank, and defeat a Primeval. There are, however, three mechanics that set Gambit Prime apart. First, there is only one round played instead of two to three. Players must fill the bank with 100 motes - instead of Gambit's 75 - to summon the Primeval, and whoever defeats the Primeval first wins the match. Second, players can't simply attack the Primeval once it's summoned like before. The Taken Ultra will have an immunity shield around it, and players must find and kill Primeval Envoys that appear to break the shield. Once all of the envoys are dead and the shield is down, a Well of Light appears that grants the Primeval Slayer buff for increased damage. Players have 30 seconds to attack the Primeval, after which the buff disappears, the shield returns, and new envoys spawn to restart the process. The Primeval Slayer buff stacks each time a Well is created, so the damage boost increases the more times a team creates a Well. Lastly, motes can be stolen from the enemy bank and placed into yours if two or more blockers are alive on the enemy side. This allows teams to slow the enemy's progression while increasing their own.

Invasion in Gambit Prime works on the same principle as standard Gambit. Each time a quarter of the bank is filled, the Invasion portal opens. Players can enter the enemy side, kill opponents to deny motes, and steal motes for their team. Once the Primeval is summoned, the enemy team's portal opens regularly, approximately one minute after an Invader returns.

Gambit Prime players can take on certain roles to help the team summon the Primeval and win matches. This is done with perks that require points to unlock. There are 4 perks for each role, requiring 3, 6, 10 and 15 points to unlock respectively. To facilitate perk acquisition, players can acquire Synths from bounties and at the end of each match. Synths can be consumed in the inventory to provide 3 points to their respective role for 30 minutes. To supplement this, there are special armor sets earned by playing The Reckoning that also grant points for their respective roles. To get armor pieces, Synths must be converted into Motes to be wagered in the Reckoning. The armor comes in three stages, with each one granting more points than the last. Illicit Armor grants one point per piece, Outlawed Armor grants two, and Notorious Armor grants three.

A Prime Team's enemy clearing machine, whose focus is to create as many motes as possible for the rest of the team to gather.

The team's mote gatherer, who gathers and deposits Motes of Darkness to quickly send blockers.

The team defender, whose focus is dispatching blockers, fighting Primevals and defending against Invaders.

The team assassin, who invades constantly to delay enemy progress.