"The Bray family shaped me to be an all-seeing savior...while your Vanguard sought to wield me as a primitive weapon. But today, that ends, and I define the reality of my own existence. My sight will stretch to the edge of this system and beyond. Never again will a threat go unseen. From this day forward, I will defend humanity on my own terms. I am Rasputin. Guardian of all I survey. I have no equal."
— Rasputin, translated by Ana Bray[2]

Rasputin (also identified as AI-COM/RSPN[3] and the Tyrant[4]) is a Warmind housed in the BrayTech Futurescape in the Hellas Basin, with a major fragment located in the Seraphim Vault in the Cosmodrome. He was created during the Golden Age[5] and was believed to have been destroyed during the Collapse until the Iron Lords awoke his wrath.[6]

"I bear an old name. It cannot be killed."
— Rasputin

Rasputin was designed and built by the Clovis Bray Exoscience Corporation, one of the Golden Age's greatest collections of scientists and engineers. He was designed to foresee potential threats to human civilization and to leverage military assets for its protection if the need arose.

While their relationship is unclear, investigations in the City Age have discovered that Charlemagne and Voluspa are subminds of Rasputin, and were developed together.[7] Malahayati is another submind of Rasputin, formerly housed by the Ishtar Collective on Venus. 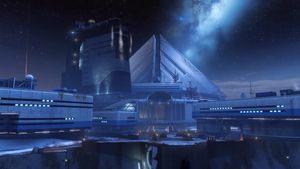 First constructed by Clovis Bray in the Hellas Basin on Mars, Rasputin was the most powerful military intelligence ever developed.[8] Dr. Anastasia Bray was responsible for teaching Rasputin language, which she accomplished by uploading a massive compilation of human works of literature into his network.

"I met IT at the gate of the garden and I recall IT smiled at me before IT devoured the blossoms with black flame and pinned their names across the sky. IT was stronger than everything. I fought IT with aurora knives and with the stolen un-fire of singularities made sharp and my sweat was earthquake and my breath was static but IT was stronger so how did I survive?"
— Rasputin[9]

Rasputin was the one to first discover the coming of the Darkness.[10] At that time, Rasputin's original core programming was to protect humanity. However, every action he had taken to that point had either failed or was statistically predicted to have a 100% probability of failure. Once it became clear that no conceivable action could be taken to fulfill his core programming, he implemented a protocol known as MIDNIGHT EXIGENT and reconfigured his core programming to that of long term survival, abandoning his previous function and going dark, while simultaneously ordering all remaining forces at his disposal to do the same.[3]

Unknown to the other Warminds, however, Rasputin had made his own preparations, known as the "ABHORRENT IMPERATIVE." If humanity was threatened with extinction, and that the Traveler attempted to leave, Rasputin would open fire with his most powerful weapons to immobilize the Traveler and thereby coerce it into a "pseudoaltruistic" defensive action. In effect, the Traveler would be forced to protect humanity if it wanted to survive. Rasputin would avoid culpability for such an attack by initiating it through a series of proxies.[11] Even before the Collapse, Rasputin had been discreetly stockpiling such weapons in the Cosmodrome, though some human operators suspected Rasputin's involvement.[4]

During the Collapse, the Grasp of Nokris, led by Nokris and Xol, Will of the Thousands attempted to conquer Mars. In response, Rasputin initiated the "Siberian Entropy Protocol", freezing and trapping the Hive and Xol underneath Hellas Basin. 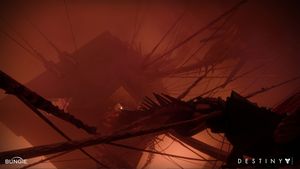 A fragment of Rasputin, left on Earth and disconnected from Mindlab on Mars, was unintentionally reactivated during the Dark Age by the Iron Lords. The group of Risen had breached Site 6 in search of SIVA, powerful nanotechnology capable of disassembling matter and reconstituting it into almost any desired form. The Iron Lords had discovered SIVA's existence and hoped to use it to rebuild human civilization. Unfortunately, despite Lord Felwinter's attempts to reason with him, Rasputin immediately classified the Iron Lords as a threat to its security and activated all of its defensive measures, including SIVA. Using an army of SIVA-modified constructs, among them militarized frames, Rasputin attempted to repel the Iron Lords from Site 6 by force.[12] Realizing that they had been arrogant and that SIVA posed a significant threat to the world, the Iron Lords fought back. Hundreds of the Iron Lords perished in the battle for the Plaguelands, with eight managing to seal SIVA within its replication chamber and partially damage it.[13] Only Saladin Forge and Efrideet survived. Rasputin, content that the trespassers had been ejected from its facilities, withdrew its countermeasures and began passive observation of the Guardians.[12] 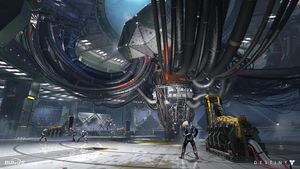 "Rasputin isn't an ally. You hear me, blood? You find yourself thinking that, you shut it down. He may not be against us, but he doesn't care if you live, if the City lives, if the Traveler lives. Trust me. He told me himself."
— Tevis Larsen[14]

In recent times, the Fallen and Guardians discovered Rasputin was still alive and protecting something valuable in the Cosmodrome. After a communications array at the Terrestrial Complex was reactivated by the Guardians, Rasputin was able to reconnect with the old interplanetary defense network, resuming control of Warsats and ground installations across the system and launching a series of orbital strikes against the Vex and Cabal on Mars. Rasputin's attacks proved so debilitating to the Cabal that Valus Ta'aurc himself ordered the Ice Reapers be released to track Rasputin.[15]

Rasputin has resisted any recent attempts by the City to parlay, even going so far as to dismember a scouting team sent by the Vanguard.[16] Rasputin is later encountered on Mars within the Dust Palace, attempting to protect a broken AI related to the Warmind of Mars from the invading Cabal. The AI is ultimately lost after a long battle with the Psion Flayers.[17]

Since awakening, Rasputin has faced a number of direct threats to himself. Omnigul and the Spawn of Crota accessed the bunker through unknown means and attacked Rasputin, either to destroy him or corrupt him for their own purposes, but were thwarted by the Guardians.[18] Later, during the Taken War, a group of Taken also penetrated Rasputin's bunker to prevent the Guardian from obtaining Golden Age stealth technology; while they did not damage or corrupt Rasputin, they had ample opportunity to do so.[19] The bunker was breached a third time when the Fallen attempted to hijack Rasputin's systems using the modified Shank S.A.B.E.R.-2, seeking to bypass the Warmind's security protocols and take control of his orbital weapon systems. Though S.A.B.E.R.-2 was ultimately destroyed, Rasputin again had to be rescued through the efforts of Guardians.[20]

Conceding that his bunker's defenses had failed too many times, Rasputin triggered the IKELOS subroutine, an initiative to provide advanced weaponry to the Guardians to aid them against the forces of the Darkness. The end result of IKELOS was the Sleeper Simulant, a heavy fusion rifle with a unique core based on obsolete DVALIN FORGE fusion rifles that the Warminds had armed humanity with during the onset of the Collapse. The Sleeper Simulant represented a successful melding of Golden Age technology with contemporary designs and Banshee-44's gunsmithing expertise. 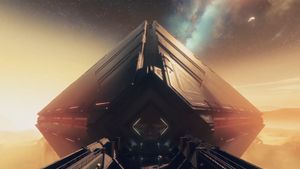 "What is buried beneath that ice is too dangerous to allow back into our world. It doesn’t think as we do. It weighs and judges our existence in its ruthless calculations, and we don’t even know what the goal is. Once, long ago, it might have been created as a tool to save Humanity. It is far more than a mere machine now. And it is broken."
— Zavala[21]

Soon after the Traveler's awakening after the Red War, the ice caps on Mars began to thaw. Detecting evidence of non-native organic chitin near its core among the rising temperatures, Rasputin assumed control of Mars' atmospheric defenses and invoked the AURORA PALISADE protocol to defend itself, crashing warsats into the surface of Mars.[7]

Rasputin soon came under siege from the Hive once again, but this time at his central core facility in Hellas Basin. Making matters worse, his attackers were led by the Hive god Nokris, a son of Oryx, and Xol, Will of the Thousands, one of the Hive's gargantuan Worm Gods. Unable to adequately defend himself against such a massive threat, Rasputin accepted the assistance of Ana Bray and the Guardian, granting them the use of the powerful Valkyrie javelin and other Golden Age weaponry.

After an unsuccessful attempt by the Vanguard to trap and defeat Xol, the enraged Worm God launched an assault on Rasputin's neural network. With the aid of the Guardian, Rasputin was able to generate a super-charged version of the Valkyrie, granting the Guardian enough offensive power to damage and eventually vanquish Xol.

With the abatement of the Hive threat, Rasputin finally permitted Ana Bray, Commander Zavala, and the Guardian to enter his core and gain an audience with him. The Warmind declared that he would no longer allow his purpose to be dictated by other parties and that he would once more watch over the Sol system and protect it from harm, but on his own terms. As proof of his intent, he launched a new network of Warsats, under his sole command.

Following the several cycles of the curse in the Dreaming City, Petra Venj sent telemetry to Rasputin for analysis and comparison.

"A line has been drawn in this system. Light on one side. Dark on the other. Where do you stand?"
— Osiris questioning Rasputin's allegiance[22]

More than two years after Xol's destruction, Rasputin was confronted by the former Warlock Vanguard Osiris. While the Guardians have hailed the Warmind as a god, Osiris knew Rasputin for what he was: a traitor for turning his back against humanity during the Collapse and a murderer who slaughtered the Iron Lords in the hundreds during the Dark Age. Knowing the coming arrival of the Pyramids from his predictions within the Infinite Forest, Osiris called to question Rasputin's allegiance in the upcoming battle between Light and Darkness. 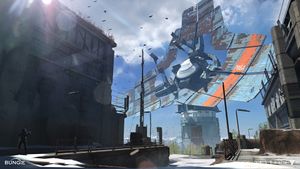 The following protocols are used by Rasputin: 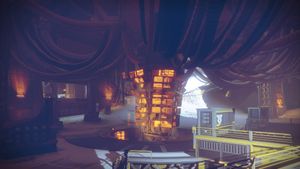 "The Vanguard still believes Rasputin to be a simple Warmind. He hasn't been that for a very long time."
— Lord Saladin Forge[25] 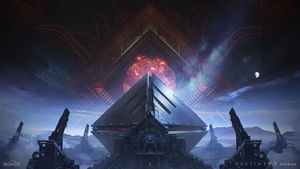