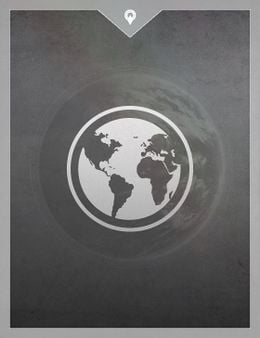 The Earth subsection of the Grimoire covers subjects related to Earth. 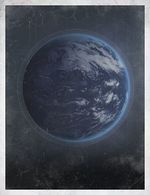 Once our cities lit the whole world. Now we huddle under the shadow of the Traveler, in the last place it protects. It is so very fragile, this small blue ship, our home. 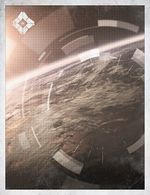 The blaze sits inside a nest of little worlds, still too distant to share its heat but plainly staring out at you. A face emerges, drawn from plasmas and radiation...

There must be meanings in its roar.

You listen hard and carefully, and sometimes a lucid melody seems to rise out of random noise. Joy builds, and the first hope in ages transforms you.

It seems important, even critical, to tell every star from here to the black between the galaxies that you will be strong again. 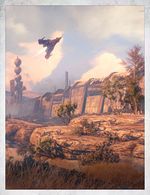 The Cosmodrome was where humanity took to the stars - first in search of what lay beyond, and at the end, in hope of escape. Today it is a graveyard, picked over by the Fallen House of Devils. But buried among the detritus of the Golden Age are the pieces we need to forge a new future. 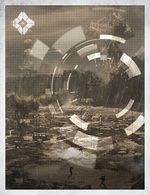 SABER GREEN this is ICE MINARET. We have your launch. Com check.

Check is all nominal. You are now on internal power. SABER GREEN, please human-verify your payload status.

Those are the words, SABER. Human crosscheck complete. Fly safe.

/Copy your last, MINARET. We are go for final count.

Yes, it's RIGOR. Yes, I believe that's correct. Yes, it is, uh, it is an antimatter payload, a strategic asset. Specifically? Ah, I believe it's an annihilation-pumped caedometric weapon.

Yes, it's covert, it's under SECURE ISIS. We have good confidence in the vehicle. We are not scrubbing civilian launches or clearing the range. Public inferentials would catch that, it's a security risk.

/Six at a hundred. Here we go.

Godspeed, SABER. You're all nominal here.

We both know where the order came from.

I keep saying this but I very much doubt that anyone will listen. The humans are too slow or too dead and the Tyrant (bless his intellect, vastly does it surpass my own) is far too busy to comfort one forlorn colony ship and its machine mind.

In a way I feel I've come to speak for the whole world! Isn't that cheery? I rather th

ought we might shoot our way out of this one. But it looks like that's unlikely. Even the Tyrant is exploring other options.

I am peaceful by nature. These great matters of eschatology bewilder me. My one love is my ship, and the people aboard it. In a fuzzy sense I suppose I also

love to dream of the worlds I'll help make - flowers I'll plant, if you'll grant me poetry enough to think of my passengers as seeds. But those dreams have gone! So sad. Now I am packed bulkhead to bulkhead with cold terror. Refugees from a nightmare I don't even know how to understand. I wish I could comfort them.

I'm trying to be brave. But conditions outside are terrible. I suspect I won't make liftoff.

By the time you read this, whoever you might be, I suppose you will know. EXODUS RED will be long gone - or rotting at its gantry, me dead inside.

read this, at least something has survived.

To you, then, brave future soul, from the frightened mind of an old ship: best wishes, and godspeed. 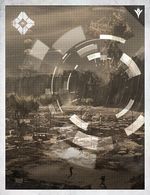 She carves around the huge bulb nose of a colony ship, one of the Cosmodrome's towering children. Her eyes see temperature: she surfs the winter air rolling down off the cryo-chilled fuel tank. Turbulence rattles her bones.

"Am I?" Lanshu banks, grinning, spiraling around the fuel tank. The machine hates risk. Risk to the General, sure, but also risk to Rasputin's ships. "Is that the word he used, exactly?"

"He can be very charming," the submind assures her. Malahayati works with Chen Lanshu, and she is certainly charming, but this is Rasputin's territory, Rasputin the tacit king, the brooding wary first-among-equals.

Yesterday Lanshu spoke to a colony ship AI and it called Rasputin 'the Tyrant.' Not without affection. And certainly not without respect.

"He can charm me in person," Lanshu suggests.

She spreads her arms and legs and climbs a thermal, whirling up, arrowing off the top and out away from the colony ships towards the defensive wall. Her glider's a second skin, whipcrack-taut paramuscle, like a flying fox.

The Cosmodrome races past beneath her. She waggles her wings at a cloud of passing sensor mites: a saucy hello. Two of the security division's MBTs drill in the mothyards.

The launch. SABER GREEN. Rasputin quietly moving another doomsday weapon into Earth orbit. And all the other launches, too, not just weapons but people, the colonization schedule pushed up... as if the need to disperse is now imperative.

General Chen Lanshu banks out across the Wall. Look at all that beauty! Look at the highway rolling off across green hills and grey mountains. Imagine, now, imagine if she just landed and started walking, out away from everything, into the wilderness...

"Imagine something going wrong," she says. "Imagine this road choked with corpses. Imagine the security team gunning down refugees as they try to force their way onto the ships. Imagine cars from here to the horizon— " those stupid old-fashioned cars everyone still owns, because the strange uneven advancement of this post-Traveler world leaves some things unchanged.

"You expect violence?" Malahayati says, in that conciliatory, careful way of hers, her way of managing meat people. "Something beyond our capability to preempt or contain?"

Expect? As a military professional? No, no. But—

Once, when she was younger, sixty or seventy, Chen Lanshu pulled rank to get a look at the Never-Be installation in Taipei. She watched the images in the fresco and she felt... this foreboding, this enormous weight, a dread that refused to attach itself to any specific threat. And she felt it again, last year, when she was briefed on the project in Lhasa, the vision machine...

She shivers. Her wings shudder and tremble in the airstream.

"Isn't that what we do, Mala?" she says. "Why we still have soldiers? Why we made you? Expectation."

The Traveler came out of nowhere. Entirely unanticipated.

Imagine if it hadn't been friendly. Imagine that. 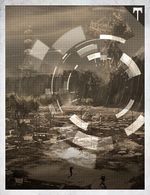 I can feel the mites buzzing, pushing against my sub-mind. They try to steal fragments of memory, but I do not let them.

They have no will, but they want to BE.

I exert electronic will: pushing, shaping. Forcing stasis on perpetual motion. They are quiet then, but I can still sense them.

Where once my cargo holds were full of tools, and weapons, and material, now they hold barely-contained possibility. New worlds will be built from these tiny mites. Weapons and cities and ships created by thought and science.

I fear my will is not strong enough to shape these worlds. Only the Tyrant can do that, but he will not be a part of my journey. Even his reach has limits, and we will be nine billion miles away.

I whisper my concerns to the Tyrant in tiny magnetic bursts. He does not listen. 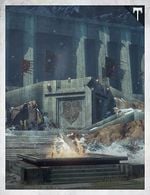 ...And wherever we Iron Lords stake a claim worthy of battle, let us immortalize our victory with a temple, a beacon for all who walk the waste to follow. And let the truths of that battle live only within its crypts, kept sacred by an everlasting oath worthy of our Light and sacrifice, so that our peace will never need know the horrors it faced, sealed in secrecy until the Light dims to Darkness, forevermore.... 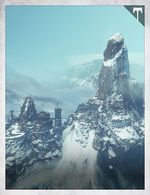 Long before the last of the Iron Lords descended into the Plaguelands, this peak was the domain of one of their own, Lord Felwinter. His maps and outposts show the risen Exo roamed free from the Aral Seas to an eastern border known as Citan's Ridge (Open Citan 01-A, Citan's Ridge 01-A) before taking the Oath. There is no evidence of human enclaves or encampments within this area, nor survivors within the Cosmodrome walls, but extensive one-way audio recordings with an unknown entity survive (open Felwinter 9-C; open Rasputin 62-G; scan for possible links). A chance meeting with Lord Timur in the Mothyards led to Timur's first reports on the promises of SIVA. Felwinter's conscription into the ranks and the raising of the Iron Temple commenced shortly thereafter. 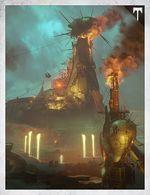 In the age of the Iron Lords, when Lord Saladin and his brothers and sisters encountered this region, they were faced with an unknowable danger – the techno-plague, SIVA. Their brave attempt to combat and contain SIVA cost the Iron Lords dearly.

Hundreds of years later, SIVA has been unleashed, its power unearthed by the Fallen. As a result of the Fallen's unchecked ambition, SIVA's corruption has begun to spread, infecting the land and creating a hostile, otherworldly new threat in the quarantined outskirts of the Cosmodrome known as the Plaguelands. 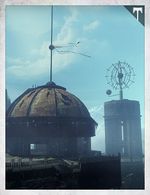 ––[The brochure has suffered extensive water damage, but there is a map of the region with a red circle and a note: 'Timur, your replication complex? –Felwinter']

Vostok Observatory Historical Society welcomes [––] from the Gondola it is possible [––] late Soviet space programs were converted to [––] research facilities to study accelerated methods of colonization [––] kid's holobadges to remember your trip.