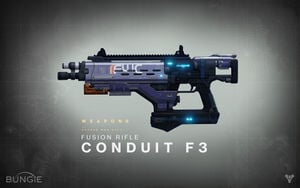 An example of a fusion rifle.

"Despite the concerns over faulty radiation shielding, the weapon's incredible power has made it a favorite of daring weapons collectors."
— Jonathan Goff, expert on Guardian militaria.

Advancements in directed energy disbursement were gained through dissection of hostile alien technology gathered in the field. The first implementation of this new technology resulted in the creation of fusion rifles. One of the first working prototypes was deemed too unstable for mass production due to faulty radiation shielding.[2] Modern fusion rifles use a pulsing emitter in order to keep heat buildup to a minimum. Consequently, fusion rifles actually fire seven distinct beams in very quick succession. Because of this, users have had luck sweeping the weapon across multiple targets, eliminating all of them with a single fire event.

Fusion rifles are intended for medium range combat, significantly outpacing a standard shotgun, but must be charged up to fire. The charge speed varies per weapon, but in general it makes the weapon significantly slower to fire than a shotgun and the bolts fired have travel time, unlike most other weapons, where the bullets travel instantly on the way to their target. If the user is adept, however, they can bypass this delay by pre-charging the weapon before acquiring line of sight to their target and finding perks that boost the fusion rifle's range, which actually represents the speed at which the bolts travel. While it was not built to handle long range combat, users that can tame its recoil and have a little luck on their side may find themselves picking off targets outside the approved range.[3] This is because stability represents the bolt spread. The higher the stability, the narrower the spread, thus increasing overall accuracy. In rare instances, they can kill multiple targets in one shot.