Crota's End is the flagship Raid of The Dark Below expansion, made available to players on December 9th, 2014. It is available if players are at a high enough level; completing the expansion's story missions is not necessary. [1]

Crota's soul may have been banished from our world, and his brood all but demolished, but Crota himself still remains. To end this threat once and for all, a new team of six Guardians needs to enter the deepest pit of the Hellmouth and infiltrate his realm, the Oversoul Throne. Though he may seem invincible, Crota's own strength - the soul-sucking power of the Ascendant Swords - can be turned against him. 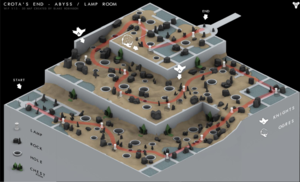 A map of the Abyss

Players will spawn at the top of the Hellmouth; to enter the raid, the players must step on the sync plate to form the bridge; once the bridge is formed, the players enter a lift at the end of the bridge. The fireteam is then dropped all the way to the pitch-black bottom of the Hellmouth and take some fall damage, as well as acquire the debuff "Weight of Darkness." This debuff builds over time and slows down players. To remove the debuff, players need to stand near one of the abyssal lamps. The lamps also help players see any pitfalls in the dark. The lamp will eventually explode after a few seconds, so players need to stick close together and quickly move from one lamp to the next to avoid being weighed down too much. Along the way, large numbers of Thralls will attack the players, including a few Cursed Thralls, a couple of Knights and a couple of Ogres. It is possible to skip the Ogres if your fireteam is quick enough through the portal into the Ascendant Realm.

The fireteam will eventually reach a dead end and a sync plate; there are no more abyssal lamps at this point, so the players will reacquire the Weight of Darkness debuff. Players need to form the bridge while defending themselves from waves of enemies; once the bridge is formed, players will need to cross it; be warned that a few more Thralls and Cursed Thralls will climb onto the bridge. Wizards will also spawn during this, unless both knights were left alive whilst running through the previous lamps. After crossing the bridge, the debuff is removed. If there are any dead players, it is better to leave them behind once the bridge is complete as they'll respawn in the next section. 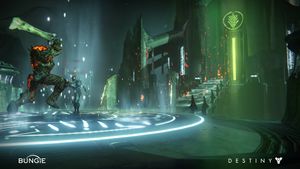 This next bridge is a bit more difficult to complete; not only are there sync plates, but also "Annihilation Totems" that will wipe the team if someone is standing under the sync plate and not the totems. Make sure to always have a teammate standing underneath both, especially if one is turning orange. Furthermore, there are two specific enemies: the Swordbearer, and the Gatekeeper. The only way to cross the bridge is to kill the Swordbearer and take his sword; without it, players cannot cross alive. Killing the Swordbearer results in the Gatekeeper spawning on the opposite side of the bridge, who can only be killed by the sword. Be warned, the sword will disappear after forty-five seconds, so it's crucial that the bridge is already formed before killing the Swordbearer and taking his sword. It is also crucial that each Gatekeeper is killed before the sword breaks, as each time the Swordbearer is killed, another Gatekeeper appears.

The first player who crosses the bridge should avoid standing on the sync plate on the opposite side, as that will activate the Annihilation Totems on their side of the bridge. Once the third player crosses the bridge, the players on the far side can now take over for forming the bridge and keeping the Annihilation Totems stable. The players on the starting side still need to kill the Swordbearer and the Gatekeeper to cross, but otherwise do not use the sync plates or totems. Upon the The fifth gatekeeper's death, the bridge will be permanently built for the sixth person, and six swords will spawn in, one for the sixth person, and five for the people already across. Then, waves of knights will begin to spawn from the left, middle, and right doors. After enoguh knights have been eliminated, Gatekeepers will start spawning in the middle. Once five more are killed, the doors on the far side will open, unleashing Thralls and Shriekers. Killing the second Shrieker will cause the doorway on the opposite side of the hallway to close, locking out the fireteam. The only thing on the other side is a chest, so it's not necessary, but be aware that it's there. Only one person needs to make it past the doorway, and after a couple of seconds, the door will open for the rest of the team. The hallway eventually leads to the final part of the raid. 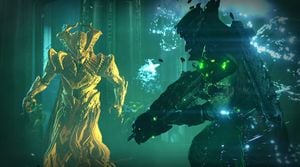 The fireteam will need to kill Ir Yût, the Deathsinger before Crota will appear. Once any player fires at any of the enemies in the room, they will have three minutes to kill Ir Yut before she wipes the party. On top of that, she locks herself in a chamber and can only be accessed by killing the Wizards and Shriekers guarding each side of the chamber. First, the acolytes and Major knights must be killed to lure out the Wizard. Once the Wizard is dead, the Shrieker will open up next. Do this for both sides and the chamber will open. Ir Yut must be killed as quickly as possible, so plan ahead what equipment will be needed. Ir Yut will stand in place for the final thirty seconds of the timer, so that may be the easiest time to unload the team's heavy ammo onto her.

In Rise of Iron, a challenge called Ir Yut's challenge is added with the addition of a 390 light version of the raid. The Ir Yut challenge is to defeat her with an Ascendant sword. To draw out a Swordbearer, the fireteam must defeat every enemy in the encounter. Teams should split into left and right groups, with one on each side dedicated to handling the Knights in the towers and adds in the middle. The remaining should work their way towards Ir Yût's chamber as normal. They should not forget the Knights that emerge inside once the barrier is broken, while avoiding damage to Ir Yût to prevent accidentally killing her prematurely. Once all of the adds are defeated, the fireteam will receive the message "Ir Yût shrieks in fear" and they should immediately return to the open arena. Three major Knights on top and a Hallowed Ogre on the bottom will spawn at each tower, along with Acolytes in the center. Defeating these enemies will spawn the Swordbearer. Defeat the Swordbearer and have your most agile player take it to Ir Yût's chamber to defeat her. She is taken down by literally any attack with the sword. Completing this in under two minutes unlocks the "Song of Silence" node in the Age of Triumph book. 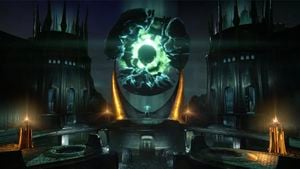 The entire team needs to enter the chamber to activate the next part. The fireteam will be sealed inside as they are surrounded by enemies. Meanwhile, Crota will be summoned on the far side of the room. His arrival casts a debuff called the "Presence of Crota", which prevents players from healing. Once the chamber opens again, players need to eliminate the enemies and locate two items: the Chalice of Light, which appears in the center and allows players to heal, and another Swordbearer (note: the Chalice does not appear on hard mode. Players will need to find other ways to heal, such as equipping armor that regains health upon picking up Orbs of Light). Only one player at a time can carry the chalice, but other players nearby can swap the Chalice and heal, but keep in mind if you swap around the Chalice too much it will disappear. Once again, killing the swordbearer will drop a sword, which is the only thing that can do damage to Crota, and once again only lasts forty-five seconds. Crota's shields need to be downed before he can be attacked with the sword, so fireteams need to strip Crota's shields quickly to maximize the amount of damage the sword wielder can do. Another mechanic to Crota is his Oversoul, and the specifics of it will change, depending on the difficulty. The Oversoul itself is a large green object in the background that the fireteam needs to damage very quickly before it wipes the party. On Normal mode, his Oversoul will activate if any member of the fireteam dies. However, on either of the Hard modes, his Oversoul activates whenever he gets up from his downed state. Defeating Crota will successfully end the raid.

Furthermore, Ogres will start spawning in the room as well after two damage phases, which prevents a new Swordbearer from appearing. It's best to avoid getting killed altogether, which requires smart use of the Chalice and taking care of the thralls that appear. Also, Crota will enrage after his health is near depletion, automatically activating the Oversoul. At this point, players should attempt to finish Crota off, or at least bring Crota as close to his enrage point as possible before attempting another sword run.

Crota's challenge requires that no member of the fireteam can hold the sword more than once during the entire encounter. If a player accidentally picks up the sword, they must either use it or hand it off to another player, but they may not pick up another sword for the remainder of the fight. Likewise, if a player accidentally drops the sword, they cannot pick it back up or the challenge will fail. Teams should employ a double-down plan for Crota, so that each player with the sword has two chances to damage him.