This is a walkthrough for the second Raid in Destiny and takes place in the Oversoul Throne on the Moon.

Crota's End divided into four stages, with no instructions or objective markers on how to complete it except by trial-and-error, much like the Vault of Glass. Note that the Raid may be entered by as little as one player, but six is recommended if not necessary to complete. The minimum recommended Level that players should be is 27 on Normal difficulty although they will be at a severe disadvantage as enemies are Level 32.

On Hard Mode, revival is disabled. While inside Darkness Zones, fallen Guardians cannot be revived by their teammates. Anyone who dies will stay dead until the remaining team members complete the current Raid phase or wipe and revert to the last checkpoint. Sunsinger Warlocks can still use Radiance to self-revive. Enemies will be Level 33; Thrall will not flinch, Cursed Thrall and Ogres are Majors. The Weight of Darkness debuff increases quicker; the bridge stays active for three seconds. 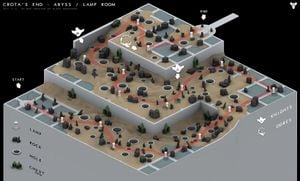 Crota's End is the shortest Raid in Destiny. It doesn't feature any waypoints or markers to guide your fireteam, just like the Vault of Glass. The raid features three main sections: the Abyss, the Bridge, and Crota, Son of Oryx. Your fireteam starts out near the edge of the Hellmouth, where you must go to a large, circular platform in front of an invisible bridge where at least one member of the team should stand on it until the platform fully forms. There is a Dead Ghost that is on one of the pillars to the left of the plate to be collected. Once the bridge is fully formed, the team crosses it and jumps down into a pit known as The Stills.

Down in the pit the team should see a lamp in the distance, glowing blue. The team will use them to navigate the smothering darkness. For the duration of this section, your team will have a debuff called "Weight of Darkness". This means characters will move slower and the effect can stack up to ten times. Standing near one of the lamps gradually removes this debuff and allows players to catch up to one another. However, when the first person in your team reaches the lamp, it starts a timer. After the timer is up, the lamp will explode, potentially killing anyone standing too close. The other major obstacle in this part of the Raid is that there will constantly be waves of Thrall trying to kill you.

There are both the regular variety and the exploding kind to look out for. Occasionally there will also be a Knight that spawns as well. This means that the team must constantly stay vigilant in order to not get overwhelmed. After the team traverses the darkness and completes the maze, there will be a large plate just like the one at the beginning. Your team must stand on the plate to activate it, although while the process goes faster the more people are on it, you are not required to stand on the plate. This grants greater mobility to players in avoiding enemies. Once the bridge at the end of the maze is constructed, the debuff is lifted and players may now sprint into the light at the end of the tunnel to advance to the next encounter. You can also complete this stage by killing the two Ogre that spawn at the second to last lamp.

Players emerge from the tunnel out of the Abyss and now overlook the Oversoul Throne. On the left of the platform players can see the Oversoul, which grants Crota his power. There are three parts to this encounter.

First, divide up into three teams of two. Send two teams to the sync plates on either side of the area. The third team should go and take the middle plate. These plates are how the bridge forms, and there are three of them on the other side as well. All three plates must be held for the bridge to be formed. Once the team in the middle takes their positions on the middle plate, the encounter begins. Thrall will climb over the edge of the platform and will attack you. keeping the enemy population in check is key for the rest of the stage.

After a few seconds, a Swordbearer will come out of a door at the top of the staircase located in front of the center sync plate. after killing it, one player should take the sword and go across the bridge. Once across, a Knight similar to the Swordbearer will come out, which is known as a Gatekeeper. These Knights are blue in color and can only be damaged by the swords. Once the Gatekeeper has been killed, the sword will disappear. This process repeats until all six players have crossed the bridge.

In order for the second set of players to come across, the ones already across the bridge should step on each sync plate on the other side. This allows the three players that haven't yet crossed the bridge to focus on the rest of the enemies. As soon as all six players have crossed the bridge, six swords will appear. Using these, kill all of the Knights and Gatekeepers that will spawn. Successfully doing so will open the door at the far side of the bridge, allowing the team to advance to the next encounter.

When the fireteam goes through the door after crossing the bridge, they turn left and will be greeted by a long hallway. The path is lined with many Thrall and a couple Shriekers. Players must go to the other side quickly if they want to access the secret chest at the end. Grouping up with your fireteam and advancing as a group will increase your chances at not dying. If the team wants to access the chest, only one person has to go in the door to ensure that the rest of the team will have access to the room. After successfully getting through the hallway, the group jumps down the hole in front of the door to the secret room. This is the entrance to the Oversoul Throne.

After the fireteam kills the Deathsinger, the team should stand on the plate around the giant crystal shard in the middle room where Ir Yut was. Doing this will summon Crota, Son of Oryx, as well as a debuff known as "Presence of Crota", which acts like the modifier "Exposure", where shields do not regenerate and health is not increased. After Crota spawns, the team should select two people: one to kill Crota, and one to ensure that the person killing Crota doesn't die. The second person is only necessary if the difficulty is set to level 30 or higher, or if the person killing Crota is a beginner. The section continues when members of the fireteam exit the room, spawning two Knights on either tower on both sides of where the team is located. Killing one Knight on the side the team goes out of is optimal for this section, as killing both Knights will spawn a Wizard and two more Knights to replace the dead ones. The technique for killing Crota is simple, but not obvious. Either one or two people will go down to the lower level of the throne room and kill enemies. A Swordbearer will spawn after a few seconds, which must be killed. The member killing Crota shold take the sword and proceed over to a rock face on the right so as to avoid being killed by enemies. The person carrying the sword is the only one that can damage Crota and can only do so once his shield is down. The best way to maximize the damage output is to have the four people who aren't in charge of killing Crota position themselves outside near the middle of the top level. This means the Knights will have a harder time hitting people and they can be spread out to minimize the risk of blowing themselves up, considering that Rocket Launchers, especially Gjallarhorn will do the most damage to Crota's overshield. High-impact Sniper Rifles are also a good all-around choice for damaging Crota as well as taking down the Oversoul after each damage phase. When the team member tasked with killing Crota has retrieved the sword, he/she should stand on the rock face on the right of where Crota is, and say when they need the rest of the team to take Crota's shield down, which will then result in Crota kneeling in pain. After they do so, the swordbearer should go up to Crota and then slam the sword a couple of times, after which the shields will come back up. The swordbearer should retreat until the cloud surrounding Crota disappears, then the team should down Crota again, the swordbearer should get a few more hits on Crota, and then should retreat back to where the team is shooting the Oversoul. This sequence continues until Crota dies. After the second damage phase, however, the team must go to a room o the lower level of the right tower where the Knights are located. After a few seconds, an Ogre will spawn. Kill it, but stay in the room afterwards. Another Ogre will spawn in the middle of the outside, underneath Crota. Kill it, and then retreat back over to Ir Yut's chamber. After the third damage phase, the team will either have killed Crota or dealt just enough damage to enrage him, in which case you should just wipe and reset, because it's nearly impossible to go get another sword to finish Crota off. If this technique is done correctly, however, Crota should die and end the raid. If the challenge mode is also done, members of the fireteam should receive extra rewards regardless of whether Knuckles of Eao was used or not. The first completion of this Raid challenge for members should also drop an emblem that recognizes the achievement, but all fireteam members should receive an Exotic "adept" weapon if it is their first completion of the week.

Exotic Armor, weapons, Faction Gear, Vanguard Gear, and possible quest completions. However; most of these are extremely rare, like exotics.

Same as drops, but certain quests may require you to complete Crota's End, giving you Pinnacle drops and gear.

There is a chest after completing Crota's End, but there may be occasional or dropped chests (maybe.)

Light of the Abyss-Legendary Fusion Rifle