From Destinypedia, the Destiny wiki
(Redirected from Arc)
Jump to: navigation, search
"I don't have time to explain why I don't have time to explain."
This article has new content coming soon from Destiny 2 and may not be complete, confirmed, or correct. Please update it as soon as any relevant and accurate material is available. Editors must cite sources for all contributions to this article. Edits that do not follow this standard will be reverted without notice. For more information, see the Citation Policy. 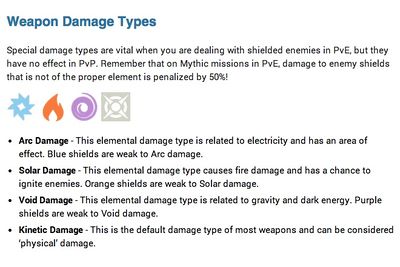 Elemental damage is a modifier that exists on certain attacks and weapons. Elemental damage is one of the manifestations of Light, and can be used to a player's advantage to make their attacks more effective. It comes into play for both Guardians and enemies.

"Sometimes the only answer is to burn it all away."
— Grimoire Solar text.

"It's fitting, then, that we have weaponized the unknown."
— Grimoire Void text.

There are four types of damage types:

The damage type on most weapons is random, though some weapons such as Exotics or Legendary Raid weapons have a set damage type.

† Murmur is capable of switching between Arc and Solar damage whereas Hard Light and Borealis can switch between Arc, Solar and Void

Each Guardian subclass focuses on one type of elemental damage. This extends to melee attacks, grenades, and Supers.

Elemental damage will do bonus damage against certain types of enemies. The most obvious way to tell if an enemy is weak to a certain damage type is to see what color shield they have; for example, Fallen Captains with blue Absorption shields are weak to Arc attacks. Every race has at least one type of enemy shielded by default but will also have another type of enemy that's shielded whenever the Epic modifier is active (or during certain public events.) [1]

In addition to the below list, Nightmare Hunts will also frequently spawn large groups of enemies (typically the lowest class associated with the Nightmare's original race, which normally should not be able to be shielded) with Solar shields that are unusually resistant to even matching elemental damage. Nightmare Breaker mods, obtained from the gamemode, are required to effectively penetrate these shields.

Enemy weapons and abilities typically have their own elemental damage types as well. Normally this doesn't come into play unless players are playing a mission with damage modifiers on. For example, a Nightfall mission with a 300% boost to Arc damage applies to both Guardians and enemies, so enemies that do Arc damage are especially dangerous. Note that Taken versions of enemies will do a different type of elemental damage than the original base enemy.