"You don't stop a Striker's fist. You just make sure you're somewhere else by the time it lands."
— Cayde-6 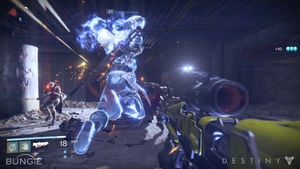 A Titan about to strike using Fist of Havoc.

Fist of Havoc is a Super available to the Titan subclass Striker.

"Smash the ground and dissolve nearby enemies in a maelstrom of Arc Light."
— Ability Description

The Fist of Havoc is an area-of-effect attack where the user punches the ground and a shockwave damages all near-by enemies. It can later be upgraded to deal electrical damage or damage-over-time areas that remain in place for an extended period of time.[1]

In Destiny 2, the Fist of Havoc is upgraded into the Fists of Havoc, which, after the initial punch, becomes a supercharged melee state where the player can slam into enemies or repeat the initial ground slam. The player's choice of subclass tree can allow the ground slam to produce a damage-over-time area or make kills increase the duration of the Super.