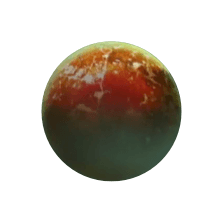 Nessus, an example of a Vex Machine world.

Machine Worlds are planets that have been fully converted into massive, functional machines within the Vex Nexus.[1]

To create their Machine worlds, the Vex begin by digging deep into the planet's core where a world-eating machine converts the planet into another link in their intergalactic chain. [2] A Pyramidion is then constructed close to the surface to continue the process. This process typically only takes a matter of days as Mercury was transformed unnervingly fast during the Collapse but for reasons unknown, the transformation of Venus was slowed until hundreds of years later. [3] Some believe that the Vex have structures in every celestial object.[4] In the process, most of the planet's matter, down to it's molecular structure, is converted into Vex material.

Mercury and Nessus are the only known Machine Worlds in the Sol System. Io's conversion is believed to have been stopped, or at least delayed due the efforts of The Guardian and quite possibly the Pyramid as well, and the same could be said for Mars with the arrival of the Red Legion decimating the Virgo Prohibition. Venus's conversion status is unknown, though it may be at risk due to the Red Legion's arrival on that world.