This article is about the Vex Conflux system. For the Lost Sector, see The Conflux. 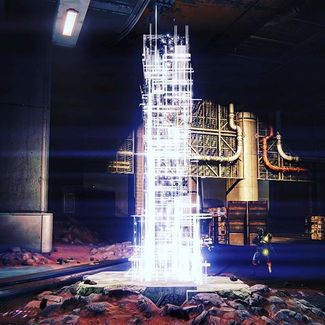 The Vex conflux, as it appears in the Tharsis Junction

Confluxes are artificial Vex constructs that serve as conduits into the Vex network.[1]

Confluxes take two forms. The first form is a pillar of intersecting white energy that appears to be a computer or a cable of some kind, filled with "non-baryonic streams"; these appear in certain Story missions and the Prison of Elders.[2]

The second is more bulkier and solid, and sometimes appears in Public Events on Venus and in the Vault of Glass. Vex are seen sacrificing themselves to these altar-like constructs, kneeling down before being absorbed in a flash of white energy. This second type of Conflux may be a form of paracausal weaponry the Vex are developing, as in the Vault of Glass they can potentially wipe out fireteams if enough Vex have sacrificed themselves.[3]