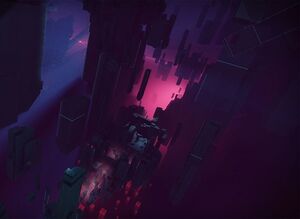 The Outer Nexus in the Vex network

"This is the Nexus. Every path leads here and ends."
— Osiris

The Vex Network (also known as The Nexus) is a massive, trans-dimensional and trans-temporal supercomputer-like virtual network the Vex operate in, hoping to incorporate it and themselves into the very fabric of the universe.[1] Mithrax, Kell of Light refers to it as a "potential reality".[2] Various Transfer Gates scattered across the solar system and Vex worlds lead to it.[3]

The network is detached from the linear flow of time, allowing the Vex to move through it. It also stores information. It appears to have some relation to physical space, as Praedyth mentions some of the Ishtar teams trapped within are "based in Vex network systems near Venus, [..] within ambit of the Vault's entrance"[4] and others further out in the system. The simulations Vex create within the network are real enough to kill a person.[5]

The Books of Sorrow describe the Hive's first contact with the Vex, where Ir Anûk, Ir Halak and Crota fought them in both the Ascendant Realm and the "Vex world". It is unclear if said "Vex world" was the network itself, but the Hive would lose some of their power upon entering it.[6]

Scientists of the Golden Age had learned to interact with the Vex network enough to send data into it.[7] Ghosts can tap into the network, pulling information from it;[8] Skolas, Kell of Kells attempted to use the Oracles to do a similar thing in order to equip his soldiers with Vex technology.[9] An access point found on Io had apparently been modified to allow Exos to interface with the network.[10]

It is possible for living organisms to enter the Vex network, the Warlock Praedyth being the first known example of that following their imprisonment in a locked-out-of-time cell somewhere in the Vault of Glass. The 227 simulations of Maya Sundaresh, Chioma Esi, Dr Shim and Duane-McNiadh had also been sent into the realm in order to explore it.[7] In Season of the Splicer, the Vanguard finds out Mithrax, Kell of Light has knowledge on how to create portals into the network, which enables Guardians to go forth to disrupt the Vex.

The link between the Vex nexus and the Black Garden is unclear, as other Collectives of the Vex are afraid and resentful of the Sol Divisive residing there,[11] but Kabr, the Legionless is presumed to have appeared in the Garden following his defeat in the Vault of Glass.[12]

"The Vex understand time in a way we never will. [...] We live in time. They use it as a tool. Any moment that's ever happened, any moment that will ever happen, they can go back to it. Play it again till they get it right. Simulate it."
— Tevis Larsen

Several Vex strongholds connected to the Vex network have distinct purposes, all eventually serving the ultimate pattern - ensuring the victory of the Vex over all other things in the universe.[13] Sekrion and the Hezen Protective are the architects for transforming Venus into another node of this network;[14] however, through the efforts of Guardians, this endeavor has been stunted and any further attempts from the Vex to restart it have been met with failure.

It is theorized that the Vault of Glass is a confluence of timelines within the network, with Atheon, Time's Conflux overseeing and regulating it.[1]

Pyramidions existing in every machine world serve as the Vex's main machinoforming engines and supposedly are all intrinsically connected to each other, leading to the same interior space. They also contain massive repositories of information. It is unknown if the intrinsic connection of the Pyramidions is possible through the Vex network or other means.

The Infinite Forest is yet another simulated reality within the Vex nexus that is controlled by Panoptes, Infinite Mind. It was created on Mercury by hollowing out the planet's core and serves as a testing ground for the Vex to simulate different outcomes of the future, in order to achieve one where neither the Light nor the Darkness exist.[5]

In Season of the Splicer, the Vex locked the Last City within the Vex network in order to drain power from it, causing the Endless Night.[15] It was found that the Axis Mind responsible for it was Quria, Blade Transform, acting by the will of Savathûn.[16]