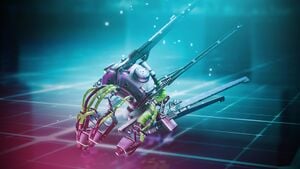 A Splicer Gauntlet is a tool crafted by Mithrax, Kell of Light for use by Sacred Splicers of the House of Light. After entering into an alliance with the Vanguard, Mithrax crafted several more gauntlets for use by Guardians to help combat the Vex's Endless Night.

Use Ether to craft Key Codes that can be used to open Conflux Chests in Override.

The Sacred Splicers of the House of Light believe they have cultivated a mystical connection to the Traveler. They say they can refocus Light "through the prism of their will."

While we at the Cryptarchy have nothing but respect for Eliksni culture, we wished to explore the truth behind these claims.

After studying one of the few Splicer Gauntlets that fit non-Eliksni hands (graciously created by Mithrax, Kell of the House of Light, for select residents of the Last City), we have determined that the wrist-mounted Gauntlet is little more than a converter that can be used to focus trace amounts of residual Light already present in the environment.

A trained Splicer can use their Gauntlet to interface with any latent data networks in the vicinity. This allows the bearer to access technological mundanities as well as deeper, infinitely more protected networks, including the Vex domain itself.

Once connected, access to these networks is severely limited for the Eliksni Sacred Splicers, though Guardians, due to their unique relationship with the Light, are able to manifest corporeally within the network for short periods of time. They can then alter the data found therein with focused percussive energy—including gunfire—in a baffling scientific process the Cryptarchy does not yet fully understand.

The Gauntlet seems capable of powering itself by transmuting unbound energy into Ether. Traditionally, Sacred Splicers would undertake great journeys to charge their Gauntlets with naturally occurring residual energy, but Guardians can use their martial prowess to convert their foes into bountiful energy sources.

In closing, the Sacred Splicers merely exploit a tool that induces Light to resonate at frequencies approaching that of the Vex Nexus, enabling them to access to certain low-security Vex systems. The Eliksni falsely believe that a deep spiritual connection allows them to bend the Light to their every whim, but this can be ea5ily dismissed as myth—the regre7able bypr0duc7 of ov3r@c71v3|| | | | |

It is disappointing to hear such condescending generalizations from a species who so recently found themselves in the graces of the Great Machine. The Light is more complex than even our greatest Sacred Splicers understand, and yet even those of us without formal training can call upon the grace of the Great Machine to refocus the world around us—even something as insignificant as the writings of a self-important Cryptarch. The Light provides. ~Eido, House Light Scribe