Walkers are large, robotic tanks used by the Fallen. It is a powerful enemy that typically appears in Strikes and large-scale Public Events.[1]

Usually deployed during low-altitude drops from Fallen Skiffs[2], Walkers are autonomous hexapedal tanks equipped with an impressive varied arsenal that allows it to efficiently deal with just about any type of threat, or multiple threats at once. Mounted under the command pod is an Arc chin-mounted machine gun that is capable of cutting down swaths of personnel in seconds without pause. On its back is its main weapon: a swivel-mounted Solar cannon that fires high-velocity, high-explosive rounds powerful enough to eliminate clusters of enemies, and it can even down a Guardian in a single shot. Mounted on the side of its main gun is a missile pod capable of launching a small salvo of Arc missiles. Lastly, Walkers can emit a powerful Arc pulse to knock back any enemies that get too close to it or to provide cover for itself when recovering from being knocked down. For additional protection and support, they can deploy Shanks and/or bouncing shock mines out of the side compartments built in the tank's abdomen section.[3]

In addition to its devastating weaponry, the Fallen Walker is protected by thick armor plating that is highly resistant to small arms fire, explosives and even Guardian abilities. While battling the Walker, it is highly advisable for Guardians to spread themselves out, use environmental cover and stay mobile to take advantage of its slow movement and targeting speed and minimize the damage it can do, as it tends to remain in one spot and rely on pivoting to aim its multiple weapons. Guardians should also keep an eye out for the laser sight as it will indicate where the main cannon is targeting and allow Guardians a chance to evade the incoming blast. It is also advised to avoid getting close to the Walker as the aforementioned Arc pulse can damage and knock Guardians back a substantial distance.

Although the body of the Walker is heavily armored, the plating on the leg segments is noticeably weaker and will break off after receiving enough sustained fire. Once the armor has been broken off a leg, or if the body sustains enough damage, it will be disabled temporarily and expose its true weak spot, an orange motor core inside of its head section. After a few seconds, the Walker will emit an Arc burst, retract the motor core, and return to normal. It is also worth noting that once a leg has been exposed, it will now take substantially less damage and should be ignored. While not technically a weak spot, the missile pod on the side of the main gun can also be shot off with enough sustained fire, thus limiting the Walker's overall firepower.

Different variations of Walker such as SIVA Walkers or Scorn Walkers may have different or modified weapons mounted on the tank replacing the standard armaments, but the overall strategy should remain the same. 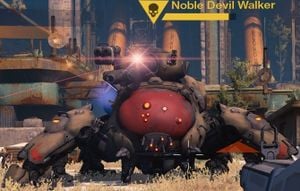